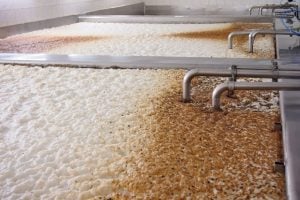 A yeast starter is an indispensable part of modern brewing. Whether you are an experienced commercial brewer or an amateur about to begin your brewing journey, we all know that a good mix of beer needs a yeast starter.

While commercial brands already know the trick, today, we will share the ultimate recipe to make yeast starter at home and brew the perfect beer bottle with its help.

What Is a Yeast Starter

A yeast starter is a special type of solution, similar to beer, that is made to help the yeast cells reproduce. Although it might resemble a brewed batch of beer, it’s not suitable for drinking. Its only purpose is to ferment the beer and make it ready to drink.

In fact when you are brewing beer, you focus on the taste and aroma of the beverage too, whereas when you are making a yeast starter, your only focus is to grow healthy yeast that will help you produce more batches of beer.

Understand Whether or Not You Require a Yeast Starter

Before you get started, think about whether or not a homebrew yeast starter would help the brew you are preparing. When you start brewing yeast starter with wort, you are essentially making a sugary mixture that will be used later.

Brewing a limited quantity of wort a day or two before starting your major brew will yield a good amount of yeast. The waiting period gives the yeast cells time to proliferate and acclimate to their new environment before fermenting the beer.

Also, dry yeast, which is rich in living yeast cells, will usually eliminate the need for a starter completely. Just make sure you preserve it well.

After all, liquid yeast starter has fewer cells, approximately 100 billion, compared to 200 billion yeast cells in dry yeast. Hence, dry yeast can function without a starter, unlike liquid yeast.

Why Should You Make Your Own Yeast Starter

One of the biggest reasons you should make a yeast starter at home is to save a few extra bucks. Since making it at home is comparatively cheaper, you can also afford to make some extra.

The benefit of having extra yeast is you can ensure complete fermentation of your beer. The more the yeast, the better the fermentation. And needless to say, efficient fermentation will produce the best-in-class beer.

If you have just begun your beer brewing journey, you are more vulnerable to yeast-related scams. Yeasts are living organisms that need to be alive to ferment your beer. While a store might accidentally or intentionally sell you dead yeast, you will surely know it when you begin making the starter.

The advantage here is, if you bought the yeast directly from the store while making a 5-gallon batch and found out the yeast is dead, you would have to put the whole batch on hold. But with yeast starters, you will know if it’s fit for use right at the beginning of the brewing process.

If you already have a batch of dormant yeast sitting in your refrigerator, why bother going to the store to buy a fresh batch? Simply make a quick yeast starter at home and activate the dormant batch. The starter will quickly make the yeast cells multiply and prepare them for fermentation.

This starter can be used to make unlimited yeast cells for free, which will ensure that your beer gets its authentic taste and aroma.

How To Make Yeast Starter?

Making a yeast starter is pretty simple. The initial steps are almost similar to making beer. No wonder they look so similar. Just follow these steps closely to make the perfect yeast starter for your home-brewed beer.

An all grain yeast starter will be prepared from wort. And, to make wort, you will need a malted cereal of your choice.

Sometimes, to accelerate the process, you might need to heat the mix periodically. This will enhance the enzyme activity and increase the rate of conversion.

You will soon notice that all the water content from the mashed grains has seeped out. You need to filter out the water carefully. The solid mass of mashed grains that is left behind is known as “Wort”.

– Sanitize All Your Equipment 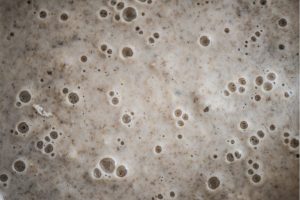 Wort is a highly sweet substance that attracts many hazardous bacteria and germs. They may end up in the mix and pose a severe health risk to the consumer. The taste of your beer will be affected in the presence of these unwanted microorganisms.

So, make sure that everything in your workstation is immaculately clean to avoid this situation. Cleansing and drying the equipment properly is step one in the cleaning process. Later, disinfect anything that will come into contact with your yeast starter using a brewer’s sanitizing agent.

– Get Your Yeast Ready

The majority of liquid yeast starters are packaged. To activate the yeast, you only need to give it a good, forceful smack on the bottom of the yeast pack.

After that, use your fingertips to gently massage it between your fingers and then leave it to incubate for a couple of hours.

Meanwhile, determine how you’ll boil the wort. It can be boiled directly in the Erlenmeyer flask if the flask is large enough and you have a gas stove.

Boiling is essential, especially if you plan to store it in an airtight container, like an amber jar or bottle.

– Start by Preparing the Wort

After that, you’ll need to fill a 0.4-gallon (1.5-liter) container with water, preferably filtered water. Beer made with filtered water will keep any undesirable flavors from the tap water from migrating to your beer.

To pour the mix into the container, we recommend you get a funnel. Prepare your container by wrapping it in aluminum foil. Since the brew will be boiling, be careful with the mix, or you could inadvertently burn your hand with the steam.

– Allow the Wort To Cool

To prevent the wort from fermenting any further, you need to cool it down as soon as you can.

For the next 12 to 24 hours, you’ll need to keep your yeast cells in the incubator. During this period, the cells will divide and grow. You can utilize your liquid yeast starter right away after the operation is complete.

When you decant yeast starter, it will seem a little foggy while incubated, indicating that it is working. After reaching this point, the fluid will be nearly transparent, with an abundance of yeast covering the bottom of the bottle.

Lifting the container and swirling it will help to eliminate odors. It will also help remove the yeast cells that may have gathered at the bottom of the container during the fermentation process.

In the section below, you will find a list of the necessary equipment for making yeast starter at home, depending on your specific needs.

Essentially, when generating a yeast starter, you’re creating a tiny batch of beer and letting it ferment. To make the starter, you’ll need to have a vessel big enough to accommodate the volume of the starter and something to cover the top, such as aluminum foil or a rubber stopper.

You’ll also need a pot large enough to boil a tiny amount of wort for your experiment. Aside from that, you’ll also require water, dry malt extract, and a sanitizer to complete the project. To ensure that oxygen is continuously introduced into the starter, you should use a stir plate. This is critical in the process of increasing the yeast cellular components in a starter.

Simply shaking the jar now and then is preferable to not introducing any oxygen at all when a stir plate isn’t available.

Calculating the Gravity, Temperature, and Volume of a Starting Material.

Here are a few tips for ensuring that temperature, gravity and volume are just on point!

Yeast starters should be kept at around 72 F (22 C) in general, with ales and lagers permitted to be a few degrees hotter and a few degrees lower, respectively.

Aim for gravity in the range of 1.030–1.040, encouraging steady growth without bringing excessive amounts of unwanted stress to the environment.

Determining the capacity of a container can be a time-consuming operation. Depending on how much starter is used and how many viable yeast cells are added, this is referred to as the inoculation rate, and it will define the potential for growth of the yeast starter. 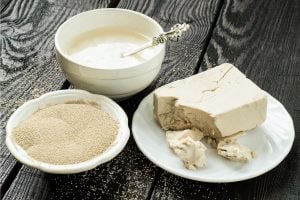 The quality of your beer depends on how well you brew and ferment it. Its fermentation efficiency depends on the yeast you use. That’s why preparing the perfect yeast starter mix is crucial to make the perfect batch of tasteful beer. Just follow our recipe and instructions, and we guarantee you will master the art of brewing beer at home in no time.