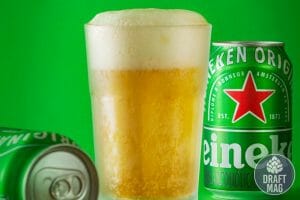 In this Heineken 0.0 review, you can find out information about this non-alcoholic beer from the second-largest beer corporation in the world.

The beer is identified as a best seller in the United States for a good reason, which you’ll find in its style profile.

If you want to drink beer without alcohol, this 0.0 beverage is the best option for you. Find out more about what the beer tastes and smells like, the ingredients, and how to make non-alcoholic beer yourself.

While some enthusiasts would say that there is no difference in the taste between normal Heineken and the non alcoholic Heineken, others would argue that the latter is flatter. But when you drink it, you will notice that the beer manages to make you forget that there is no alcohol in it, thanks to its style profile.

The 0.0 beverage features a golden-amber color and crystal clear appearance. It also generates a good head but low retention, so it dissipates quickly. There is also a little bit of lacing as it clings to the side of the glass, and the consistency is thinner than an average beer.

As for the aroma, it can be seen as a shadow of the alcoholic version. You will perceive the fresh and crispy nature of the beer, as well as its malt and fruity character.

The mouthfeel gives you some bubbles on your tongue, quite like carbonated water. But while it’s similar to that of the full-strength version, it feels a bit like syrup, making the non-alcoholic character easy to identify.

When you first sip the 0.0, you might be surprised by how sharp it tastes, but the more you drink, the more balanced it becomes, with an exciting blend of malt and fruit caressing your taste buds. You will also taste hints of cereal in the flavor, blending seamlessly with the malt.

A high bitterness replaces the sharp taste, but this also eases off after a few sips. In general, it does not taste diluted like some non-alcoholic beers, but instead tastes like the calmer version of the regular beer, making you enjoy the distinct beer taste.

The hoppy character becomes evident in the finishing of the beer and a cardboard-like aftertaste.

The 0.0 beer follows a double brewing process and uses the same ingredients as the standard Heineken. After it is brewed, the alcohol is removed carefully through vacuum distillation. This is why it tastes and appears very similar to the average beer and doesn’t lose its beer character.

The Heineken 0.0 ingredients include water, barley malt, hop extract and the A-Yeast Heineken. Thus, the 0.0 is made exactly the same as its 5 percent counterpart, just without the alcohol.

Remember that the 0.0 beer has an ABV of less than 0.05 percent, which is a trace amount. It is even lower than the amount you see in some kinds of food.

History and Success of the Alcohol-free Heineken 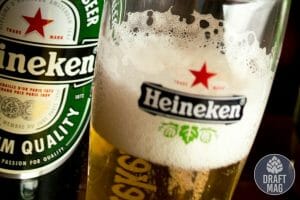 The Heineken non alcoholic beer is a malt beverage made with natural ingredients and launched in the Netherlands in 2017 after being under development for two years. Heineken has been well-known in the beer industry since it was founded in 1864 in the Netherlands.

The 0.0 beer achieved early success, quickly expanding to 16 markets in Europe in the same year it was released.

By 2019, it had expanded to over 30 global markets and was officially exported in the United States. During that time, drinking no-alcohol or low-ABV beers was not a trend in the country as much as it was in Europe, but the beer quickly became popular in the U.S.

Now, it is the best-selling non-alcoholic beer in the United States, as it is designed to provide the same experience as Heineken but without alcohol. It might surprise you to know that 0.0 is not the first alcohol-free beer from this giant corporation as it has another product called Buckler. But 0.0 is the first non-alcoholic version of their flagship ale, which is undoubtedly the company’s most popular beer.

What Makes a Beer Qualify as Non-alcoholic?

You might wonder if the 0.0 beer can classify as non-alcoholic since it still has some trace amounts of alcohol in it. Since the Heineken 0.0 alcohol content is less than 0.05 percent, you can rest assured that it is technically a non-alcoholic beer.

Because of this, you can drink the beer while driving or if you’re disallowed from alcohol for health or religious reasons. Even pregnant and breastfeeding people can drink the 0.0 beer without any repercussions. It’s the perfect choice for those who want the taste of beer but can’t or won’t consume alcohol.

How To Make Non-alcoholic Beer

Although you might know what’s in the Heineken 0.0 beer, it would be impossible to replicate the beer without the actual recipe. If you enjoyed drinking the 0.0 beverage and want to try making non-alcoholic beer, you can follow the steps below.

Although it has no alcohol, this is still beer, so you should choose a recipe and make the beer first. The recipe should require complex sugars that won’t be fermented by yeast and transformed into alcohol. Also, avoid recipes with corn starch since they can be easily fermented.

Complex sugars would also give your beer more body, and you can add to this by mashing with the highest temperature possible, around 158 degrees Fahrenheit.

If you’re new to making beer, gather your ingredients, including grains, hops and yeast, and follow the steps below.

The first thing to do is to mash and steep the grains. To steep, you can wrap the grains in a mesh bag or cheesecloth, fill the brew kettle with water, and heat it. Then, lower the cheesecloth into the water, ensuring the temperature does not surpass 180 degrees. Do this based on the recipe.

Add specific hops while the wort is boiling. This is done after mashing and steeping the grains. The recipe you use will include the exact times you are meant to add the hops.

You can place the kettle in an ice bath or use a wort chiller to cool it. Once it’s cool, put it in the fermenter, add water, and swash it to improve its aeration.

Now you can add the yeast into the fermenter where the wort is to ferment. Leave it in a cool and dry place for at least two weeks so that the beer ferments into alcohol.

Just like how the Heineken zero zero beer is made, you need to separate the ethanol content, which is the alcohol, from the beer. This will give you a beer with less than 0.5 percent ABV.

Transfer the beer into a brew kettle or stainless steel pot once fermented. What you now have is the standard, alcoholic beer.

Use a stovetop or oven to heat the beer at 175 degrees Fahrenheit for up to 20 minutes. The oven is the best choice, especially if you preheat it at the lowest setting, as it gives you a consistent flavor. You can use a spoon to check if the beer still tastes alcoholic.

Be aware that as you boil, there will be a strong smell of ethanol in the air.

Now you can cool your alcohol-free beer in an ice bath below 800 degrees Fahrenheit. You can also carbonate the beer to make it feel bubbly and less flat.

Since there’s no alcohol in this beer, you might think you can drink it with any type of food like a standard beverage, but the original Heineken 0.0 taste is a bit similar to that of the alcoholic version. Some of the best dishes you can have with this include spaghetti and meatballs, pizza, fried chicken, sushi rolls and curry.

You can also try some dishes that go well with Heineken such as seafood, smoked, roasted and grilled food and light cheeses.

While 0.0 might not be 100 percent alcohol-free, the beer is a non-alcoholic beverage, so you can try this out whenever you don’t feel like getting tipsy.

Give this non-alcoholic beer a try today, and you can discover why it’s the bestseller in its market right now.