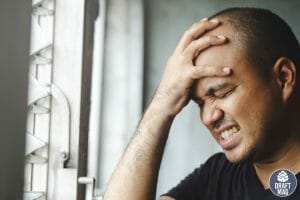 If you’ve ever had an IPA headache, then you know that this is a common experience among beer-lovers. Talking to beer enthusiasts, you hear the same claim — that they don’t take IPAs or any hoppy beers because of their headaches after drinking.

This guide comprehensively discusses why IPAs and beers cause headaches. You will also learn how to prevent or relieve them and many other essential aspects of the topic.

Why Do IPA Headaches Happen?

The primary cause of headaches after drinking IPAs, or any beer, is alcohol, which is the main ingredient in all beers. With that being said, IPAs often contain high alcohol by volume. A typical IPA can have an ABV of up to 20 percent. In fact, when IPAs have low alcohol, beer enthusiasts may say it’s not a great beer or that it has been watered down.

So what is IPA? IPA (Indian Pale Ale) refer to a group of beers distinct for their strong hoppy and bitter qualities. This classic originates from England and has been a fan favorite amongst beer lovers for centuries. Generally, IPAs are endowed with hops, which gives them their unique flavor distinct from others.

The high hop content also accounts for the bitter nature of this beer class. Many describe IPAs as just being boozy and bitter. However, modern-day brewers have produced IPAs that explore beyond the bittering features of hops. There are now IPAs characterized for displaying the fruity and sweet flavors and aroma of hops.

– Why the Alcohol in IPAs Cause Headaches

Alcohol contains histamine, a chemical substance that boosts the body’s immune responses. However, this histamine also causes inflammation at different sites in the body. Scientists over the years have also linked these body messengers to causing a sort of vascular headaches.

Another reason why alcohol may cause headaches is that it is a diuretic. These are substances that increase the frequency of urination, which means they cause you to lose lots of body fluids. When this happens, it may lead to dehydration, and one of its symptoms is a headache.

– How Long Does An IPA Headache Last?

An IPA headache usually doesn’t last beyond 24 hours for most people. For most people who have this after-effect headache after drinking beer, drinking enough water or other fluids with sleep is enough to rid these symptoms completely.

However, there are cases where it extends for up to three days. It may even be more severe that it prevents you from reaching optimum activity levels. In such scenarios, you may need to use pain relievers or consume other drinks like tomato juice and coffee to help better manage the issue.

– Can Hops Cause Headaches?

Yes, hops have the tendency to cause headaches. Consumption of hops, especially in the natural form, tends to cause a lot of imbalance in the body. They cause stomach upsets and a series of nasty headaches. However, they go through adequate processing during beer production to reduce the side effects of these oils.

However, reports still suggest that these hops affect brain chemistry in one way or the other. So they may account for some of the reasons why hoppy beers, as in IPAs, tend to cause more hangover effects than other beer classes, like lagers, for example. These hops are even toxic in animals, so do not give beer to your pet.

There is also the case of hop allergy, where some individuals react to hops in various ways. Some people complain of chest pains, hives, etc. In some cases, these effects may even be fatal.

– Do Hazy IPAs Cause More Headaches?

Yes; hazy IPAs, like Sierra Nevada Hazy Little Thing, have been reported to cause severe headaches. Some individuals claim that hazy IPAs cause more headaches than regular ones. There are even reports of individuals who claim they only have post-beer headaches after taking hazy IPAs.

Hazy IPAs, as the name suggests, are IPAs with a cloudy appearance. The characteristic turbidity of these beers is because they are unfiltered. These beers use a special kind of yeast that suspends the hops and malt residues.

It is possible that the presence of hops and malt residues account for hazy IPA headaches. However, we cannot precisely state that hazy IPAs cause more headaches. In fact, lots of people enjoy these beers without having hangovers or any such ailments.

Some reports suggest that some individuals only develop hangovers after taking these IPAs and not other types. Perhaps they may be allergic to some of the components in these beers. Besides the hop and malt residues present in hazy IPAs, these beers may contain other undissolved protein particles in suspension.

In filtered beers, the haze is removed for clarity. These additional proteins may react in the body of these individuals, causing a sort of allergy that results in headaches or migraine attacks noticed after drinking these beers. 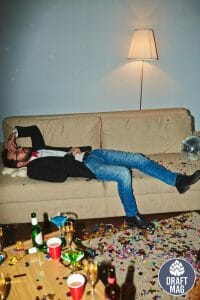 There is no direct correlation between the amount of drink or beer you consume and the after-effects. We have reiterated several times in this article that beer headaches differ, as some don’t even experience it.

There are cases where you may take lots of alcoholic drinks and yet feel fine even the following day. However, just a couple of glasses may result in severe migraines on another day. A couple of factors come into play when it comes to describing what happens after drinking IPA or any beer at all.

Some of these factors include:

Besides the other reasons, we discussed why alcoholic drinks result in headaches. Some scientists suggest that it might be genetically induced.

– Alcohol-induced Headaches You May Get From IPAs

There are two forms of alcohol-related headaches. They are:

This type of headache is often called the “cocktail headache.” It features a pulsating sensation on the forehead and starts about three hours after taking an alcoholic drink. Eventually, it often subsides with time — not going past 72 hours. However, it may become intense, especially when you try to engage in physical activities.

This form is a little more common than the first. It is what we generally refer to as a “hangover.” You have probably experienced this at one point in your life. It occurs about 12 hours after taking the alcoholic drink, sometimes when you wake up the following day. The pain isn’t as acute as the immediate headache.

– Are There Beers That Don’t Cause Headaches?

No, there is hardly any beer that doesn’t give you a headache because the primary cause of beer headaches is alcohol, a major constituent in all beers. However, we must also mention that there are low and non-alcoholic beers that may not cause headaches or hangovers.

Likewise, many people who have tried different beer styles reported that IPAs are the main culprits. Some of these people say that they take other beer styles and remain fine without taking any precautions to avoid hangovers.

This suggests that it’s perhaps the high ABV or hops in an IPA craft beer that is responsible for the way the body reacts, causing headaches. So if you search for beer that doesn’t give you a headache, perhaps you just need to stick to the less hoppy variants and those with low ABVs.

How To Avoid Headaches

Perhaps you are one of those that develop headaches and hangovers after drinking an IPA. Don’t worry; there are measures to prevent this to allow you to enjoy your favorite beverage.

According to the National Headache Foundation, the following are measures to put in place to prevent a craft beer headache:

How To Relieve the Headaches

Even after taking these precautions, you might still develop headaches after drinking beers or any other alcoholic beverage. You can take the following measures to reduce these nasty headaches:

You may also drink sports drinks like Gatorade. They are good against dehydration as they help replenish lost electrolytes and body fluids.

We have extensively discussed the relationship between alcoholic drinks, IPAs especially, and headaches. With that said, let’s have a brief summary of what the article discussed.

As you enjoy your favorite IPA beer, don’t forget to take note of your body and tackle any changes you notice from beer intake.