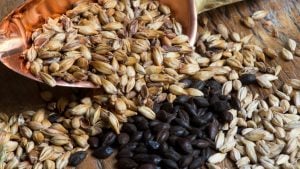 Pilsner malt vs 2 row is a comparison that needs a bit of investigation: Pilsner malt produces crisp, clean, and relatively light beers with a touch of white bread character for characterful beer styles. On the other hand, pale malt is kilned slightly higher for richer flavors and less crispness.

With various differences between pilsner malt and 2 row, beer lovers prefer either for distinct reasons. In this article, we compare pilsner malt with pale malt to help you understand the difference between the two.

Pale Malt (2 Row) and Pilsner Malt provide most of the fermentable components of beer while creating the platforms or bases for building other flavors. Specific beer styles are produced using certain base malts – for example, Pale Malt is used for producing Pale Ale while Pilsner malt for producing a Pilsner.

Pale and Pilsner malt are different objectively, grown in different parts of the globe, and get kilned to varying levels. Even so, many beer lovers find it difficult to differentiate the 2-row malt taste from the pilsner malt taste.

Pale malt produces a noticeably darker wort than that of Pilsner malt due to their kilning difference. Also known as German 2-row malt, Pilsner is modified to a slightly lower temperature and kilned to a vividly light color.

Adding Crystal 20 to both base malts gives a more sophisticated flavor and a crispier finish. 2 row barley and 6-row barley vary in kernel arrangement when viewing the head down to the axis.

The More Noticeable Difference Between 2 Row and Pilsner Malt

Clearly, at the end of the day, it all depends on the technicalities of how you want your beer to be, rather than how you might want the drink to taste. This is an important factor to think about before making use of either of these base malts. 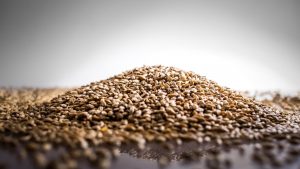 Pilsner malt is among the least modified types of malts often used to prepare light beers, such as a German-style lager. The delicious base malt adds sweet, distinctive malt flavors to beers of any type despite being less modified. However, it involves an extra process that makes it a bit intimidating.

The pilsner base malt is also among the lightest in the market and produces pale wort with extremely light bready flavors. It can produce beer with mild sweetness, depending on the grain bill and yeast you use. American pilsner malt, just like Belgian and German versions, is widely available.

If used in large quantities to produce beer, pilsner malt creates problems with Dimethyl Sulfide (DMS). This is an off-flavor with hints of corn or creamed corn. Boiling your malt vigorously with the lid off and chilling the wort fast eliminates the problem.

The pale lager malt is kilned to a blonde color value of 2 Lovibond or less; the low Lovibond range makes the malt perfect for ales and continental lager styles with a pale straw-gold color.

Pilsner Malt is made using 2-row spring barley. Germination and modification are done under steeping and germination conditions for evenness and homogeneity, respectively. The air-on temperature when finalizing kilning ranges from 176 F to 185 F.

All malt beers are produced using Pilsner Malt. However, it’s also used as a base malt for brewing purposes. Its low color makes it ideal for whiskies as well.

Pilsner is delicious and versatile as a general malting grain and base malt, enabling it to work in varied applications. The base works for most beers, including European lagers, American light lagers, porters, and IPAs.

Finally, the solid grain properties and extremely light color make it ideal for producing other specific color beers as well.

2 Row Pale Malt is a generic and light-colored base malt with an extremely light grain or malt or oyster cracker or bread crust flavor. Most recipes for craft beers, including those on the internet, make use of pale malt as a base.

Unlike the round, soft, sweet, and directly malty flavor of Pilsner Malt, Pale Malts (2-row) give a deeper color with biscuity, toasty hints. Moreover, Pale Malt is made with 2-row barley with more proteins, a higher diastatic power, and fewer alpha-amylase enzymes.

2-row malt is used as a base for most American styles, including American IPA, Pale Ale, and Blonde. With its high diastatic power, it reliably converts up to 40 percent of the grain bill from starches to sugars.

Unlike 6-row malt with a grainier flavor, 2-row malt has a maltier, fuller taste. Most differences between base malts lie in their distinct flavors due to unique malting approaches, different barley species, and varying kilning methods.

What Is Base Malt?

The soul of beer is malt. Whereas some beers use grains, such as oats, wheat, and rye, malted barley (apart from water) is a major ingredient in most beers.

Malt contains the sugar (found in starches) needed to convert yeast to alcohol and carbon dioxide.

– Functions of Base Malts

Base malts play multiple roles in a beer recipe. The three main functions of base malts, be it 2 row malt or Pilsner malt, include:

Why Pilsner Malt and 2 Row?

Pilsner malt is delicious with lighter flavors and color than other malts. It gives a nice and distinct malt flavor with a fresh or green taste and cracker hints or the scent of fresh wort.

Malted barley is categorized into 2-row and 6-row because kernels of Barley grow in rows of two or six on the stalk. Whereas home and craft brewers often use 2-row malt as a base malt when producing beers, corporate brewers use 6-row malt for light lagers in specific styles, such as pre-prohibition beers.

Malting involves starting barley seeds or kernel growing to release the enzymes, proteins, and starches stored inside the seeds. Heat is used to stop the process at some point to create malt.

The flavor of the malt, when placed in hot water, depends on how long and hot the malt heats. Base malts go through a kilning process that does not involve prolonged heating. This results in paler malt with more subtle flavors than other long-heated malts.

The contents of the kernel change when the malt is subjected to longer kilning times at higher temperatures. As a result, they’re less capable of converting their starches into sugars during the process of malt mashing.

Barley grains are added to hot water to mash and the starches converted to simple sugars for easy processing using yeast. The enzymes in the barley facilitate the conversion process. Base malts self-convert because they contain lots of enzymes.

A mash of a particular base malt like pale two-row contains everything required to self-convert starches to sugars. Diastatic Power is the ability of base malts to self-convert and it’s represented using a number. For example, two-row malt has a diastatic power of 140OL.

However, specialty grains don’t self-convert because the higher temperatures and prolonged kilning times destroy the enzymes in them. Base malts are added to grains to provide the enzymes required during mashing to convert the starches into sugars. 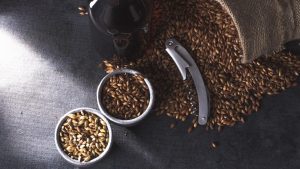 Pilsner malt and 2 row malt are made from 2-row barley and have a clean, mild malty character. However, Pilsner has a slightly crispier and thinner taste than 2-row – the character of authentic Pilsner lacks aroma and maltiness.

Pale malt is more cost-effective than Pilsner, making it ideal for someone keen on spending less on their favorite beer. Whereas Pilsner malt is ideal for light lagers, Pale malt is perfect for ales; so, choose 2-row for more color or Pilsner for a lighter hue.