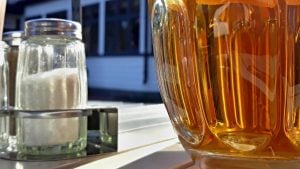 Sodium in beer is something many people immediately focus on, especially the ones who are at high risk of a heart attack as foods and beverages containing high sodium content can mess with blood pressure and cause other serious health conditions.

But when we talk about the sodium content of beer, rest assured, it isn’t a topic of worry as beer generally has very low salt and protein content. This article will explain the salt content in beer, which brands to avoid, and which ones are preferable.

Why Do People Add Salt to Beer

There are plenty of reasons why some people willingly add salt to their beers. It is believed that adding salt can mend a bad hangover, while others believe it fights off gas and indigestion. Different types of salt can be added to beers.

Scientists say that salt is one of the most desired products across the world. It makes any type of food taste better because salt tends to overpower bitterness and bring out other flavors in food.

Here are some reasons people around the world add salt to their beer:

Beer tends to go flat in less than a day once the can is opened. Most people throw the beer away as the fizz dissipates, but many people add a pinch of salt to it instead, which causes the gas to form again and rise to the surface.

As mentioned above, salt can overpower bitterness. This is one of the many reasons why some people who prefer strong beers but not bitter ones tend to put in some salt to balance the bitterness out. But watch out, if your beers start to taste salty, you have added a tad bit more sodium than necessary.

Salt added to beer reduces its flatness, but the gas that it forms doesn’t last long. The bubbles reduce soon, and the beer can go flat again. Some people put salt in beer to fight indigestion from drinking gassy, carbonated drinks.

Salt is an excellent seasoning. Think about it: you can put salt on anything, and it enhances its taste. This is why some people believe that salt can also enhance the flavors of a beer. Brewers brewing gose beer add up to an ounce of salt in five gallons of beer.

Salty foods increase urination, according to science. Which, in turn, makes one want to drink more beer. That’s why some people add salt in their beer, to make room for more beer. If you enjoy a couple of cans in one sitting, this can be a life hack.

– Prevention Is Better Than Cure

Adding salt is believed to retain water in the body, and hangovers are primarily because of dehydration. When you drink excess alcohol, the body throws away all its water, essentially causing hangovers. This is why some people add salt to their beers, assuming it will lead to lesser dehydration due to higher water retention, which means lower chances of a hangover the following day.

Here are some of the sodium options available to add to a beer:

How Much Sodium Is in Beer 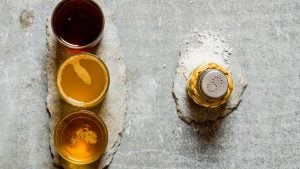 Let us address the elephant in the room —

how much sodium really is in a can of beer?

One serving of regular beer only has 14 mg of sodium. According to the American Heart Association (AHA), a person should consume no more than 2300 mg sodium a day. This means a can or two of beer a day won’t do much harm if you can keep your sodium intake in check otherwise.

A molecule of salt has one sodium and one chloride atom, that’s why the chemical term for salt is Sodium Chloride. According to AHA, one person a day can take up to a teaspoon of salt in all forms, but for people with heart health issues or high blood pressure, it is best to reduce the salt intake to 1500 mg per day.

– Salt Content in Beer: In Order of Highest To Lowest

The following table shows how much sodium content your favorite brand of beer contains:

Sodium content varies from one brand to another. As we saw in the table above, Heineken is nil on sodium content, as there is extremely low sodium in light beer.

Here are some of the healthiest beers with the least number of calories on their flavor profile:

Beer High in Sodium: Beers With a High-calorie Count

As we also saw in the table above, Budweiser has the highest sodium content. There are plenty of other beers with a high sodium count, and this table will show a quick overview of different high-calorie beers, their flavor profiles and sodium content:

One can of beer (12 oz) has about 10-13 mg of sodium. For a normal person with no dietary restrictions, beer wouldn’t cause much change in blood pressure, but if you have heart health issues, then the best option would be to shift to low sodium beers, which also have low calories, enabling you to enjoy a couple of cans a day. With that being said, having more than three beers in one sitting can temporarily raise your blood pressure.

– Can You Drink Beer on a Low Sodium Diet?

Yes, there are plenty of low sodium beers available in the market. If you are on a low sodium diet, the next time you go to the market to pick a beer, turn the can around and check the sodium content of the beer. You can also refer to some options mentioned above.

– Is Beer Generally Good for Your Health?

Beer has no fat or cholesterol, and some beers are also low on calories and carbohydrates. There are two types of cholesterols in the body — the HDL (good) and the LDL (bad). Beer keeps the HDL levels high and maintains the LDL low. Some studies show that a beer a day can even boost your HDL up to 4 percent.

Beer is also a doctor-recommended cure for kidney stones. As beer helps in excess urination, it will also help your kidney function properly.

– If We Use Beer for Cooking, Does It Make Food Salty?

Beer brings out the richness in any food it is added to, but it does not make it salty. The salt content in beer is so minimal that any change in taste it brings to food would go unnoticed. Despite that, beer is often used for marinating and basting, and some bakers also use beer to add an extra lift to bread and cakes.

– Is the Sodium Content in Beer Bad for Your Health?

Beer has a bare minimum sodium content. While a couple of cans won’t make much difference, anything overboard can cause trouble even to the healthiest people. Also, sodium is present in other food products too, especially in packaged and processed foods. So unless you are consuming a lot of those along with plenty of beer on the side, you should be good to go. 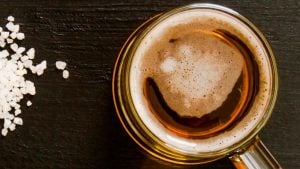 Beers consumed in moderation are safe, even for a person on a low calorie, low sodium diet. There are plenty of beers available in the market to suit each one’s needs.

The next time you are headed to a bar, try putting a pinch of salt into your beer and see for yourself if the above-stated facts stand true to their word.