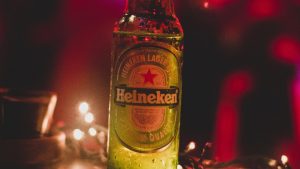 Stella Artois vs Heineken are the two beer brands that took Europe by storm. Readily available in restaurants and bars across the world, the flagship pale lagers come packed in iconic yet controversial green glass bottles. Furthermore, both Heineken and Stella Artois beer brands are popular among Americans.

With a few similarities between the two beers, it becomes necessary to find out what differentiates them, so let’s determine the difference between Stella Artois and Heineken.

The main difference between Heineken and Stella Artois is related to their origins more than anything else. Moreover, they share various similarities and a few more differences, so we are going to be comparing the beer brands Stella Artois versus Heineken below to help you out decide which one you would like best.

Sebastian Artois, a brewmaster, bought a brewery known as Den Hoorn and located in Leuven, Belgium, in 1717. Artois had previously worked in the Belgian brewery as an apprentice.

Although the exact date when the bought brewery was founded isn’t known, Stella Artois states on its labels that it was founded in 1366. Notably, after Sebastian’s death, his wife took over the brewery and later his son.

Then, Albert Marnef, the brewery manager and a close friend to the family, took over the company after Sebastian’s son.

Furthermore, Stella Artois was released first in 1926 as a limited holiday beer. The brew was named after the ‘Christmas star’ in Latin. The word “star” was translated to the Latin word “Stella” with the same meaning. Not much later after its release, the beer became a popular, regular drink for many people.

On the other hand, Heineken was established by Gerard Adriaan, who was an entrepreneur. He purchased the Amsterdam-based De Hooiberg brewery in 1864 and Adriaan set out to produce the greatest lager beer.

The brewery won an award at the International Maritime Exhibition, after being renamed “Heineken” in 1875. The award it won at the exhibition contributed to its success in the global market – it soon became the most popular export beer to France.

After the 1933 Prohibition repeal, Heineken entered the U.S. market as the first European beer and soon began its reign in America. Heineken exports to the U.S. grew by 600 percent only four years after its first entry into the nation.

Stella Artois is made using malted barley, Saaz hops, and water, and its alcohol percentage (ABV) is five. The brewery also produces Solstice Lager, Cidre, and Midnight Lager, which is limited edition.

Moreover, Anheuser-Busch, the company behind Stella Artois beer, announced at the onset of 2021 that Stella Artois production would be moved to the United States from Europe.

The Heineken alcohol percentage is also five. Developed by Dr. Hartog Elion in 1886 at the brewery’s research laboratory based in Rotterdam, the beer is also made using “A-yeast.” What’s more, the company produces Heineken 0.0 and Heineken Light, in addition to its flagship Heineken beer.

Heineken flavors, on the other hand, are bolder and linger longer. Also, Stella beer is lighter than Heineken with sweet aftertaste notes.

Lastly, Heineken has a nice fruity taste of grass and berries, with mild undertones of creamed corn. Its taste is also earthy with a slightly bitter finish.

Heineken is packed in 12-ounce bottles while the capacity of Stella Artois beer bottles is less by 4.8 ounces.

Beer bottles should have the ability to block UV rays, especially imported beers, because they stay longer in storage before reaching the end consumer. Most beers in green bottles sold in the U.S. are imported and often result in that skunky flavor and smell that we mentioned before.

– Consumers – Who Drinks the Beers?

Heineken is consumed by millions of people across the globe. The beer is found everywhere and is more popular in Asia, Africa, and the Caribbean.

On the other hand, pale lager drinkers especially love Stella Artois and beers like Stella. The easy-to-drink beer is mostly popular among Europeans living locally and abroad.

Heineken, the second largest brewer worldwide, claims to deliver about 25 million beers daily in 192 countries. The company was also ranked second in 2020 as the most valuable beer brand worldwide, with a net worth averaging seven billion dollars.

The beer brand is most American beer lovers’ favorite drink and they simply can’t get enough of it. According to YouGov, Heineken is currently ranked fourth as the most popular beer in the United States. Notably, baby boomers are the majority of its consumers.

– Reviewing Heineken: What Do People Say About It?

Despite being rated on YouGov as the most popular beer across the globe, some beer lovers detest its taste. Moreover, it’s “slightly skunky” with an aftertaste that many people dislike. As a result, the beer has a low score when it comes to beer preference.

With the color of washing-up liquid, Heineken is commonly known as Fairy (Dreft) in Belgium. As a result, Belgians don’t like this beer.

Heineken is admirable with top-notch branding – the company uses clever advertising to showcase its high quality and exceptional superior taste. However, as we saw earlier, the branding doesn’t really do much for the flat taste of the beer.

Moreover, the omnipresent beer is available in Brazil, Spain, Haiti, Burundi, Mongolia, and East Timor for easy access and purchase to everyone.

– Heineken Beer Bottles and Their Relationship to Hops

Unlike brown beer bottles, the green bottles used to hold Heineken lack UV light protection. Moreover, if you didn’t know, hops give the drink its signature bitterness but are sensitive to light. So, the taste is altered when the beer comes in contact with sunlight – something that is inevitable.

The molecules of hop flavor develop free radicals that react with sulfur-containing proteins, such as cysteine. The reaction forms a chemical known as 3-methylbut-2-ene-1-thiol.

Even in small amounts, the chemical used to brew Heineken beer can be detected in its taste – most beer lovers refer to this lager as “skunky” (or “catty”).

Stella Artois is a best-selling beer from Belgium and the Stella brewery behind it is the most successful worldwide. At the World Beer Awards in 2019, this beer brand won the Best International Lager Worldwide. 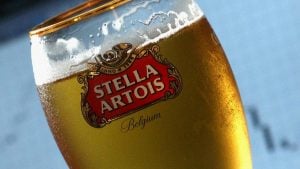 Moreover, the beer brand is more popular among millennials. Dubbed “light,” the beer is easy to drink and less skunky than most brews. Therefore, you can easily sip on Stella Artois beer while hanging around your backyard or garden on a BBQ cookout.

– Reviewing Stella Artois: What Do People Say About It?

With most beer reviewers terming it “forgettable” and “generic,” Stella Artois isn’t a favorite of all drinkers.

Some beer lovers prefer Stella Artois beer because it’s served in a goblet, but you can serve the drink in cans, bottles, or even pour it out of a keg using a hose into your mouth. Stella Artois is a great lager beer, but not the greatest.

The taste of Stella Artois beer is light with an aftertaste of sweetness. Although it also contains malt, yeast, and mild citrus, it has a stronger taste than Heineken.

Which Beer Results in an Intense Hangover When Drunk in Excess?

Heineken contains fewer chemicals than Stella Artois beer. Therefore, Heineken results in less of a hangover than Stella when consumed in large quantities.

However, hangover totally depends on the drinker. If you don’t mind a hangover and love the Stella Artois taste, get your hands on it when you have a party and know that you’ll consume more than you would otherwise.

On the contrary, you should pick Heineken if you don’t want a hangover the next day after consuming lots of your favorite beer.

Which is Better – Heineken or Stella Artois?

Although Stella Artois has a stronger and more vivid taste than Heineken, it’s no better. The better lager beer is totally dependent on your taste and preference. So, the better beer between the two lagers is what your taste buds love. 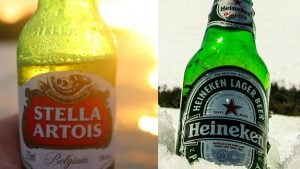 A blind taste test of Heineken and Stella Artois at the Stockholm School of Economics revealed no vivid difference in the taste of the two lager beers. However, experts disagree with this finding.

Stella has a crisp, light, and refreshing taste, making it ideal for pairing with pizza and chicken wings. On the other hand, Heineken is best served on a hot day as a refreshing beverage that pairs well with BBQ food. Whichever one of the two you choose, don’t forget to enjoy them responsibly!