Bud Light Lime Strawberita is a drink that boasts of a two-in-one character – beer plus margarita. But many beer enthusiasts disagree with this claim, and new beer drinkers are curious. 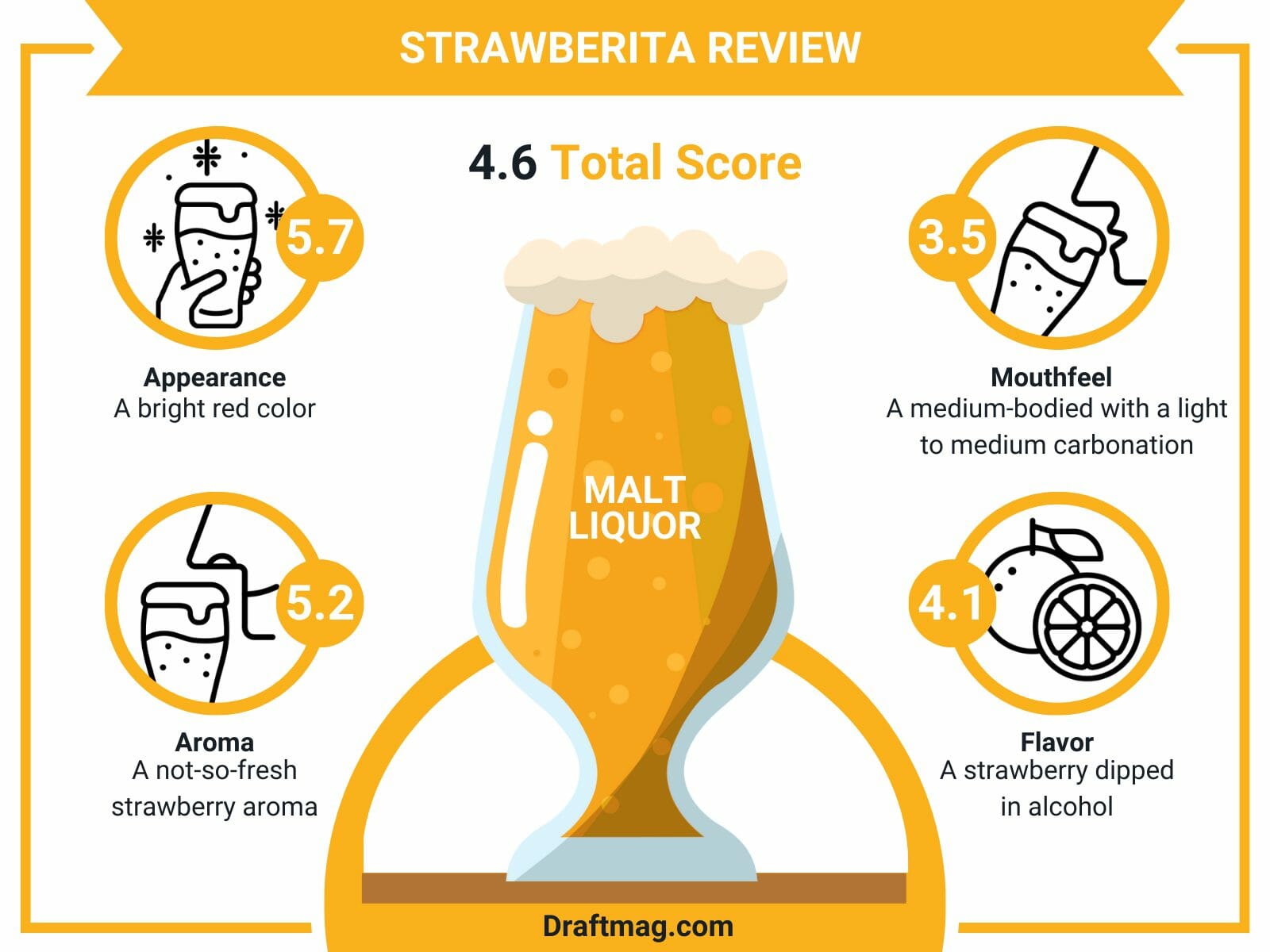 For this reason, this complete review will detail the beer’s characteristics, from its appearance to its aroma, mouthfeel, and flavor. Read this beer review to the end, as we’ll also cover the beer’s history, ingredients, food pairings, and nutrition facts.

While malt liquors are brewed with similar ingredients to a typical lager beer, there are unique characteristics that make Strawberita stand out. Let’s find out what they are in this section.

Strawberita pours a bright red color with a thin head that clears within seconds. Interestingly, if you pour gently, there may be no head formation and lacing. The beer has a light to medium carbonation, so you’ll notice bubbles rising in the beer glass.

Upon opening a can of Strawberita, you get a not-so-fresh strawberry aroma upfront. Malty and tart notes follow this. Although the beer claims to be a margarita with a twist, there is no distinct lime or boozy note on the nose.

Strawberita is medium-bodied with light to medium carbonation. You get a mild bubbly tingle on the palate with a slightly syrupy feel. 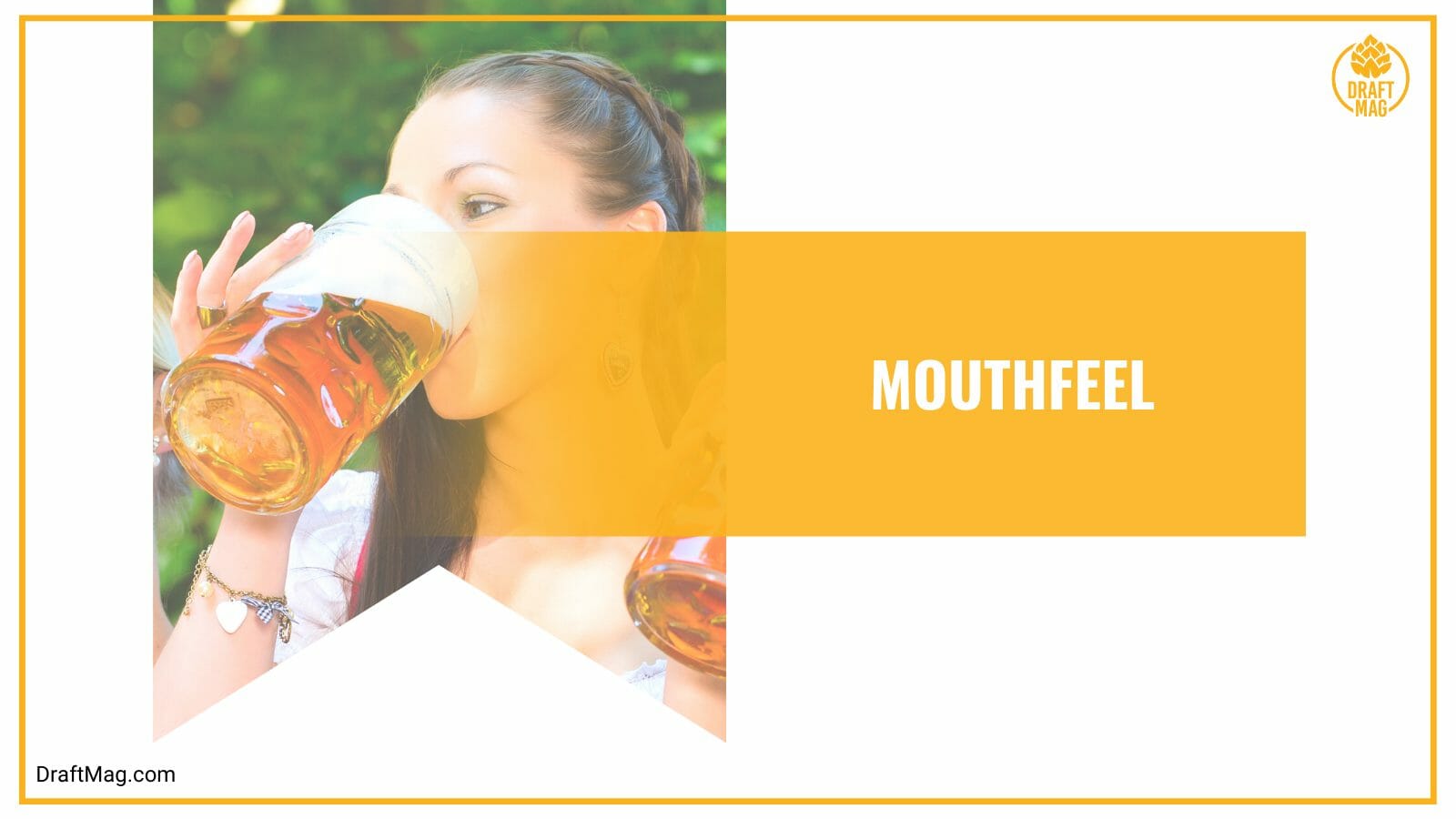 Also, unlike a margarita, the alcohol warmth isn’t sharp. Overall, it is refreshing and finishes dry.

The flavor is similar to strawberry dipped in alcohol and loaded with sugar. Midway, you get malty hints with a light bitterness from hops. Also, there is no distinct alcohol heat for a drink with 8 percent ABV.

A statement on the beer can says, “margarita with a twist.” A typical margarita contains tequila, but Strawberita does not taste anything close to tequila.

While drinking Strawberita alone is okay, you can combine it with various dishes. All you need do is select foods that match the beer’s strength and flavor profile. You can serve this malt beverage with foods that leave a lingering aftertaste like toasted bread, smoked or roasted beef, fish, chicken, or turkey. Other foods that can also join the table are baked beans, mushrooms, peanuts, and chickpeas. 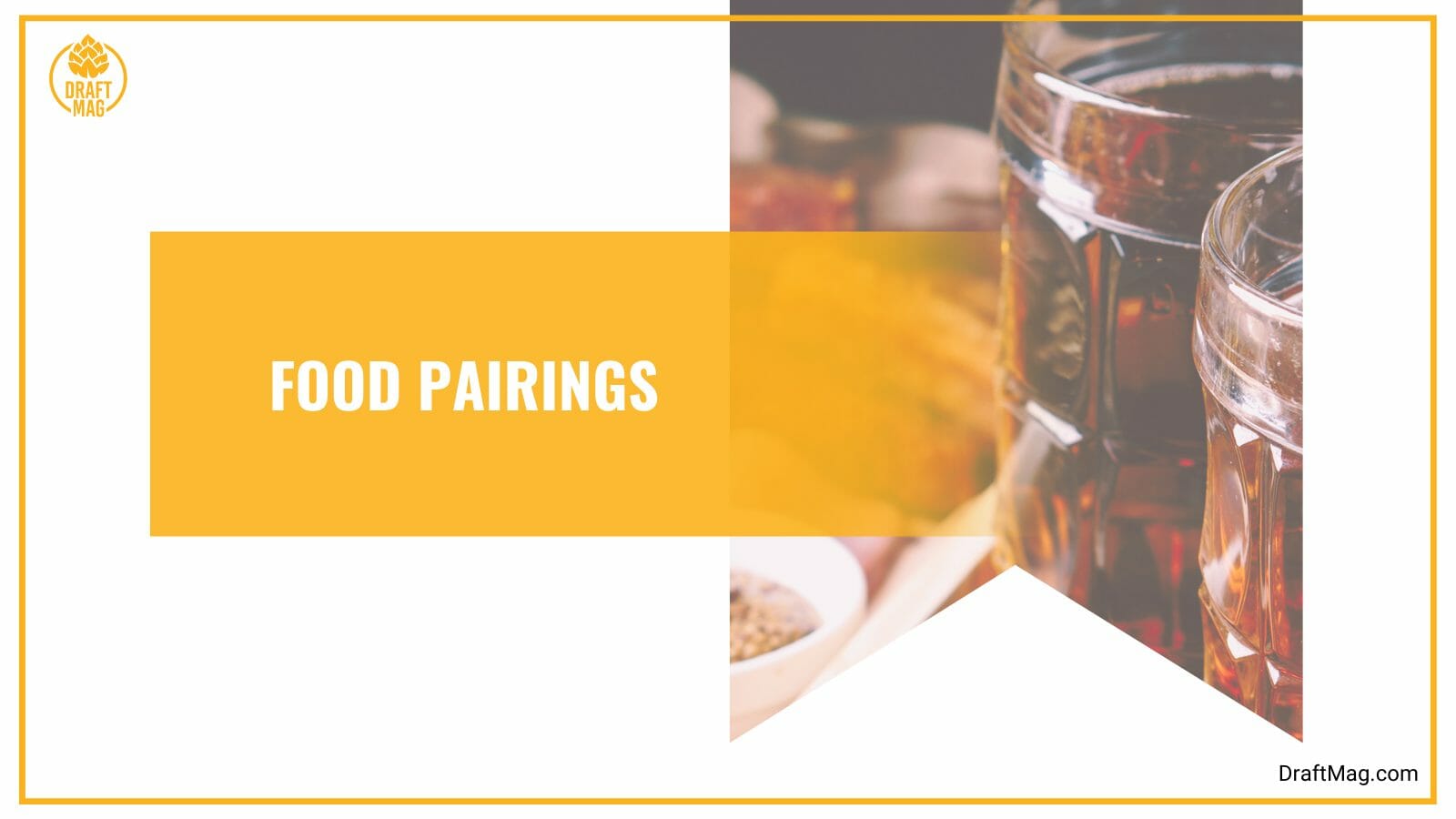 Also, cheeses are perfect with Strawberita; consider stilton, Roquefort, Gouda, and gorgonzola. Other valid considerations include sandwiches, pizza, hot dogs, and some Mexican and Italian cuisines.

Also, you can introduce seafood, tiramisu, burgers, and salty snacks when served with Strawberita. Take note that the above food pairings do not stop you from trying other options. However, make sure you don’t overwhelm the beer’s flavor while exploring. And to better enjoy Strawberita, dress the tip of your cup in salt and lime and serve it between 30-45 degrees Fahrenheit.

This beer is brewed with basic Strawberita ingredients and additives, giving it a unique character. They include:

When it comes to Strawberita nutrition facts, an 8 oz can of Strawberita contains about 198 calories, 1g of protein, and 24g of carbohydrates. These values show it has a high calorie and carb content. As a result, this drink has no place in a keto diet meal plan. Also, Strawberita contains zero percent fat, and it’s vegan-friendly.

In addition, the Strawberita alcohol content is above average at 8 percent, which is typical of malt liquor. So while you may not get boozy from drinking multiple 8 oz cans, the reverse is the case with the 25 oz cans. Above all, know your limit and drink responsibly.

Strawberita is one of the brands under Anheuser-Busch’s Bud Light Lime-A-Ritas series. Anheuser-Busch, the leading brewing company in the US, introduced the series in 2012, and the pioneer product was “Lime-A-Rita,” a malt liquor. Later in 2013, the company released a strawberry flavor called Strawberita.

After that, the company introduced other flavors, from mango to cranberry, apple, raspberry, peach, etc. They include Mang-o-Rita, Raz-Ber-Rita, Cran-Brrr-Rita, Apple-Ahh-Rita, and much more. Also, all brands under the series claim to be margarita flavored, but many consumers disputed the margarita facts as these beers don’t taste like tequila. 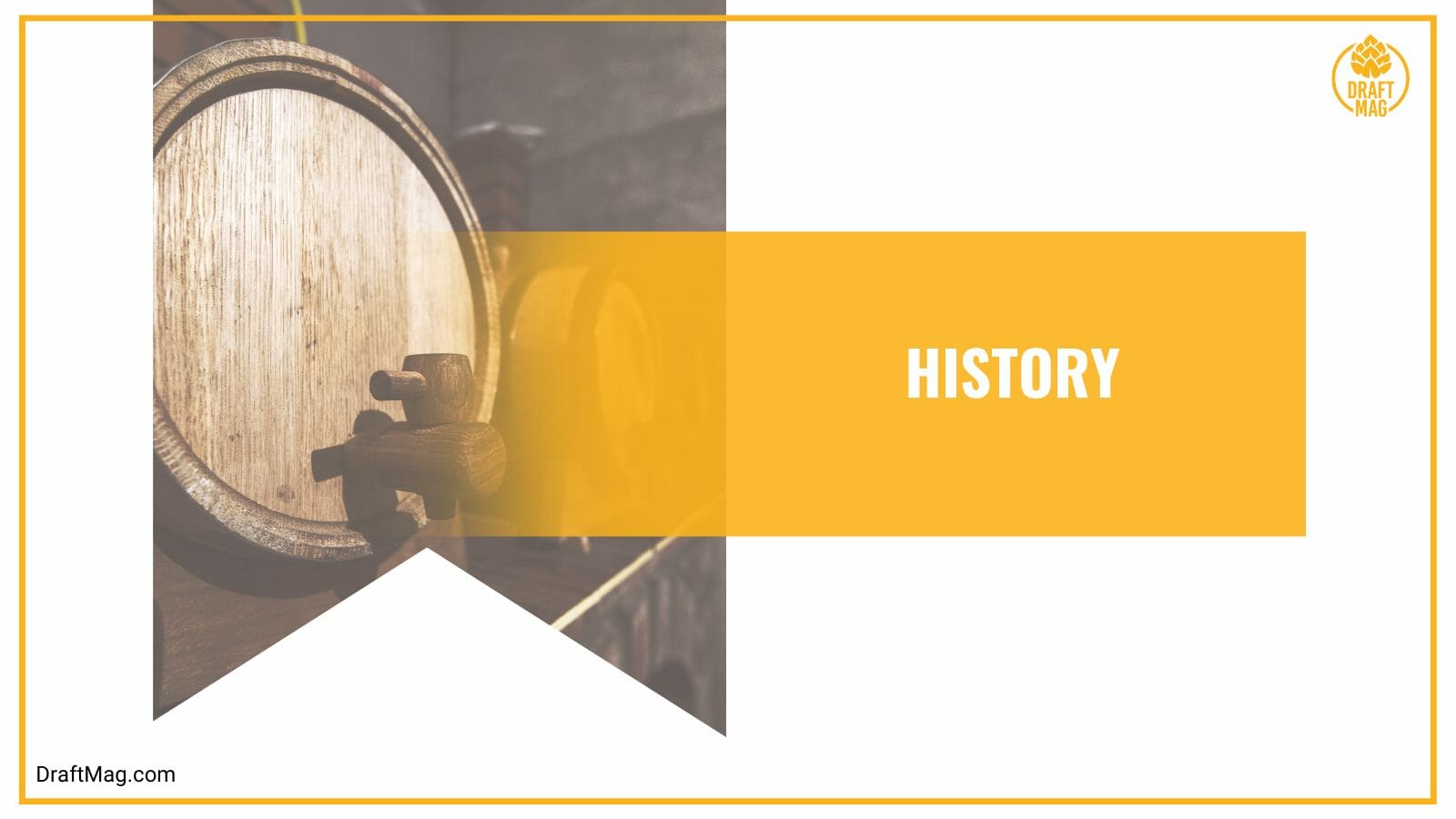 This led to lawsuits which were later resolved. After that, Anheuser-Busch changed the branding on some of the beers to “Ritas.” The Ritas brand beers include Straw-Ber-Rita, Water-Melon-Rita, Freeze-A-Rita, Mang-O-Rita, and Lime-A-Rita. Strawberita is available in 8 oz, 16 oz, and 25 oz cans. Also, Anheuser-Busch produces Mix-A-Rita 8 oz packs containing four cans of Mang-o-Ritas, Raz-Ber-Ritas, and Straw-Ber-Ritas, plus six cans of Lime-a-Ritas.

– Will Drinking Strawberita Make You Drunk?

Strawberita has 8 percent ABV, and while this alcohol content is not enough to get you drunk if you take one standard can of this beer, taking multiple cans can get you drunk. You should be especially wary when drinking the 25 oz beer can. Regardless, do not take more than two in an hour if you plan on operating heavy machinery.

Malt liquor is a beer style that incorporates adjuncts like rice and corn to barley malts to increase the alcohol content of beers like Strawberita, but these adjuncts don’t necessarily influence the beer’s flavor.

By now, you should know what Strawberita has to offer, so are you giving this self-acclaimed margarita a shot? Here is a recap of the beer’s characteristics:

Remember to serve the beer with the dishes suggested in this review or any alternative within your reach. Once again, note that Strawberita has a high alcohol content, so drink responsibly.