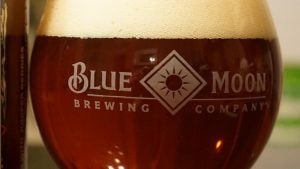 If you’re reading this Blue Moon review, you’re probably curious about the Belgian White beer, one of America’s most popular beers. The unique Belgian-style Wheat Ale can be found in liquor stores all around the United States.

It’s never too late to try Blue Moon if you haven’t before and discover what makes it special. But before you purchase a bottle, check out this complete review to know what to expect.

The Blue Moon brand isn’t the only exciting part of this beer. The Belgian White Wheat beer offers a delicious taste and whole experience for anyone who enjoys drinking beer.

The Belgian White Wheat has a different appearance from other American beers, with a cloudy outlook and a tiny orange tinge. It has a hazy and naturally unfiltered appearance with colors of gold and orange. The head is medium-thick but with poor retention, so it disappears quickly even if it’s creamy.

Anyone will notice the citrus aroma when they take a whiff of the Blue Moon beer, but this is combined with scents of wheat and coriander. The beer becomes even more aromatic if you take it with an orange slice.

The Blue Moon beer features a light mouthfeel, even if it’s not a light beer. You can taste the creaminess and smooth enthusiasm, making it an ideal beer for hot weather. Its delicate taste won’t make you feel heavy.

As the Blue Moon Belgian White is a wheat beer, this is a significant part of the taste. The wheatiness of the beer is combined with a juicy flavor, and you can even taste spice notes on the finish. It is a refreshing beer with mild sweetness and a natural feeling. There are a lot of oats in the recipe too, which bring the wheat and citrus tastes together.

If you serve your Blue Moon lager with an orange slice, you will bring out the citrus qualities even more. The fruitiness of the beer will become more pronounced for your enjoyment.

Most people enjoy the Belgian-style beer with its juicy orange slice, even those who don’t drink beer normally. This is why Blue Moon has become a globally famous beer brand and continues to develop new flavors that impresses their customers.

Before checking out the beloved Blue Moon White, here are some interesting facts that you should know.

Blue Moon started in 1995 and was created by Keith Villa, an innovative brewer who later became the founder and head brewmaster of the brand. He began working in SandLot Brewery, Denmark.

You can find Blue Moon and its flagship beer, Belgian White, worldwide. The unique name was derived from the statement, “a beer this good only comes around once in a blue moon.” If you find yourself in any of the 25 countries, then you can check out this beer.

Although it’s a Belgian-style wheat ale, the Blue Moon Belgian White is produced in the US and Canada. Their choice of name has led to trademark disputes and lawsuits. The orange slice garnish is not a Belgian tradition either.

– Blue Moon Has a Different Name in Canada

In Canada, Blue Moon is called Belgian Moon instead. MillerCoors stated that this was done to separate it from the Labatt Blue Beer already present in the country, but there are also other trademark issues involved.

– It Was Inspired by Baseball

Blue Moon is known to have been inspired by baseball, which is unsurprising seeing as the Sandlot Brewery was located in a major league ballpark. The beers sold by the brewery were named after the games played in that ballpark.

– There Are Over 20 Varieties

While the Belgian White Ale is the flagship Blue Moon beer, this brand has many other varieties. You can get up to 20 rotating beers annually, including some popular ones like Chile Golden Ale and Iced Coffee Blonde.

– You Can Tour Some Blue Moon Breweries for Free

For a walk-through tour, you can check out the Blue Moon brewery in RiNo District, Denver. You will see the equipment and the brewers behind the delicious beers there. The brewery also has a full-service restaurant with food that pairs perfectly with Blue Moon beer. Sometimes, the beer is even part of the recipe.

The Blue Moon brand also seasonally releases beers that went out of rotation. It does limited releases of discontinued beers like Raspberry Cream Ale for a short time. If any of your favorites were discontinued, keep a lookout to see if they’ll be re-released.

– It Is Served With an Orange for a Reason

Whenever you order a Blue Moon, it’s served with an orange slice if the bartender is doing it right. Keith Villa got his Ph.D. in Belgium and discovered different foreign mixes that inspired his recipe.

These include white wheat, coriander, malted barley, Valencia orange peel and oats, so when he saw Europeans serving lemon wedges with their beer, he decided that orange slices would fit the Blue Moon beer flavors. 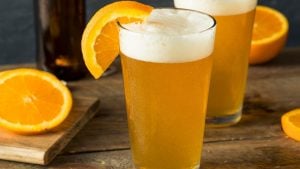 There’s no doubt there’s a brilliant recipe behind the Blue Moon flavor profile, but that is a trade secret at MillerCoors. Although no one knows how they make it, the beer has wheat, Valencia orange peel, oats and coriander.

Many homebrewers have attempted to replicate the beer with these four ingredients, but no one has gotten the right taste known to be offered by Blue Moon.

The alcohol content of Blue Moon is set at 5.4 percent, which makes it great for drinking for a long time, whether during dinner or when relaxing in the afternoon. It does not focus on hops, as the IBU is only 9, making the bitterness level very low.

A 12oz serving of Blue Moon contains 14 grams and 170 calories, and since it’s not a light beer, it has similar nutrients to those like it.

If you enjoy making your beer at home, you can try out this all-grain recipe and compare it to the original Blue Moon beer sold in liquor stores near you.

Whether you’re purchasing cans to drink at home or you’re ordering them at your favorite bar, the Blue Moon beer taste can be enjoyed on its own. However, you can always enhance the flavor by taking note of the garnish, the type of glass, and the serving temperature.

The right garnish for a Blue Moon is a wedge of orange, which will enhance the flavor of the orange peel in the beer. Although you can use other citrus fruits like lime or lemon, orange is the most well-known so you can start with that.

The right serving temperature for Blue Moon is between 40 and 45 degrees Fahrenheit. The beer tastes best when it is cold, and as it becomes warmer, the flavors will open up and you can enjoy the full experience.

You might wonder whether you should get the draft, can or bottled versions of this beer. While all are available for Blue Moon, draft beer is generally fresher and is less exposed to oxidation and light than cans or bottles.

It would be best if you serve your Blue Moon beer in a pilsner glass, a narrow glass that becomes wider at the top and has a tall height. It allows the beer’s aromas to open up and gives room for the head to develop.

Blue Moon can be paired with a wide range of food and will not overshadow what you pair it with. You can have this beer with seafood like grilled shrimp or shrimp cocktail, or spicy Asian food, which makes the beer refreshing. Food like Pad Thai or sesame peanut noodles will also work well.

If you’re a vegetarian, you can enjoy Blue Moon beer with different fruits and vegetables, especially those that go well with citrus. You can also have this beer with tofu and tempeh marinades. 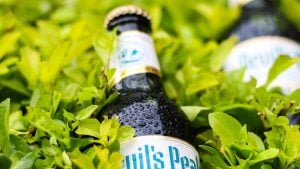 As long as you enjoy the light and spicy beer with sweet notes, you’ll consider Blue Moon as a good beer. The fact that the beer is well-liked by many is a sign that it’s generally a good beer, and if you’ve been told that it’s a girly beer, you should know that there’s no such thing.

If you’re curious about the Blue Moon beer, you can visit a liquor store close to you to purchase a can or a bottle. Or, if you’re in Denver, check out the brewery for a full experience!