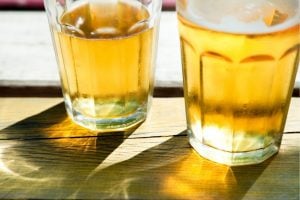 Miller Lite vs Bud Light – which of the two is your favorite beer? With each light beer presenting unique characteristics, you’re likely to prefer one to the other.

Let’s find out more about the differences between the two light beers to help you pick your preferred brand.

The craft beer industry continues to flourish in the United States. However, only three brands – Coors Light, Bud Light, and Miller Lite, dominate the market.

According to a 2019 article published online by VinePair, the industry’s top selling brand was Bud Light, with about 29.4 million lager barrels shipped into the country. Miller Lite was ranked third with about 12.6 million barrels. It ranked behind Coors Light, which came second with about 14.9 million barrels of craft beer.

The three brands account for over 25 percent of craft beer sales in the U.S. – Americans probably love these beer brands for their brilliant marketing or maybe it’s their obsession with light beers driving the industry.

Nutritional Values: 3.2 carbs, 96 calories, and less than 1g of protein

Miller Lite was developed in 1967 as a light beer. It was founded by a biochemist, Joseph L. Owades, an employee of Rheingold Brewery based in New York. In 1975, the beer was first introduced in the U.S. as ‘Lite’; the beer was meant for weight-conscious consumers, accounting for over half of all low calorie beer sales in the 1980s.

The brewing company injected a lot of funds to drive its ‘Lite’ marketing initiatives. In 1974, it ran a successful campaign with the tagline ‘Tastes Great, Less Filling.’

Miller Lite began to lose its market share in the early 1990s, prompting it to change its marketing campaign. The brand began to develop witty ads containing humor that appealed to adolescents. Although it was targeting young male American beer drinkers, the campaign was not successful.

Miller Lite comes in a champagne-bottle-like design with an elegantly-sloped neck and an occasional gold foil restating that it’s the finest beer in America. The beer is linked to affluence, luxury, and effervescence.

The sweet and light beer tastes like norn nuts and apple juice with hints of toffee. The skunk-free drink is impressive and comes in a clear glass bottle.

Fermentation Process – Bud Light uses rice for fermentation. It feeds yeast with rice instead of corn syrup to produce alcohol.

Bud Light was developed as Budweiser Light in 1981. The light beer was introduced as part of the US-based Anheuser-Busch’s product. Although Bud Light entered the beer market much later, the brewing company behind it marketed it as a strong beer brand.

It was marketed based on the idea that people drink light beer just for fun. The company used humor and funny memes to promote its brand. In 1994, Bud Light became a leader in light beer production. Later, it became the world’s best-selling beer in 2007.

The crisp and clean beer is perfect for consumption in hot weather and has a mild alcoholic cream soda taste. The flavor of Bud Light is non-offensive (making it easy to drink) and it gives a consistent taste.

The leading beer brand shipped about 33 million beer barrels to the U.S. in 2017 alone. The company’s marketing efforts in the 1980s also contributed to its first place rank in the beer industry.

In this section, we analyze in detail the differences between these two light beers, from their marketing strategies to the alcohol content, production progress and taste. 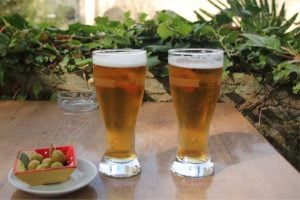 Bud Light’s mother company was established in the 1850s, but the light beer only became available in 1982. It began as a small brewery based in St. Louis and was co-owned by Eberhard Anheuser, a German immigrant.

Although he bought the brewery in 1860, it was Adolphus Busch, his son-in-law, who made the company popular and renamed it Anheuser-Busch. InBev, a Belgian company, acquired it in 2008, renaming it Anheuser-Busch InBev (AB InBev).

On the other hand, Miller Lite was founded by Joseph Owades, a brewmaster and biochemist, in the 1960s. Owades was working for Rheingold Breweries when he invented the light, low-calorie beer named Gablinger’s Diet Beer.

The beer retailed under the brand name ‘Meister Brau’ for a while before being acquired in 1972 by the Miller Brewing Company. The brewery changed the beer’s recipe and renamed it Miller Lite.

Miller Lite and Bud Light have the same alcohol content at 4.2 percent ABV. However, Bud Light has more calories than Miller Lite, making the latter beer a winner in this regard. Available in a 12-ounce can, Miller Lite contains only 96 calories while its counterpart, Bud Light, has 110 calories.

The Super Bowl ad campaign that Bud Light ran in 2019 mocked its two largest rivals for using corn syrup to brew their light beers. Probably, this was a response to Miller Lite’s 2016 marketing campaign that mocked Light Bud for its tagline.

The ad, as published on The Beer Connoisseur, stated “AB InBev uses rice in their recipe to produce Bud Light. Miller Coors, however, uses corn syrup to produce Miller Lite. Whichever is the case, the outcome is – yeast consumes the sugar in the corn syrup supplied to them to facilitate its fermentation process.”

The marketing campaign resulted in a lawsuit. Although the first judgment made in 2020 was in favor of Miller Coors, the ruling was overturned later by a federal judge, stating, “Litigation isn’t a market competition substitute.”

Both Bud Light and Miller Lite are “Lite American macro lagers.” These types of beers are light with clean and crisp flavors. Designed for consumption when cold, the beers are great for drinking in hot weather. Therefore, the two craft beers are perfect drinks for summer.

Miller Coors, the brand behind Miller Lite, deployed an aggressive marketing strategy in 2016. Its strategy enabled it to take on Bud Light, a Belgium-based competitor under the Anheuser Busch InBev (AB InBev) brewing company.

According to David Kroll, the company’s Chief Marketing Officer, the strategy Miller Lite adopted was only meant to contrast the brand and its competitor, Bud Light. Kroll explained further that their rival brand loves to use sophomoric humor in its ads, but Miller Lite is more assertive.

Analysts criticized the Miller Lite vs Bud Light advertising war, stating it was unethical to make direct negative comments about a rival product or company. The analysts found the comments unusually personal.

Is marketing all about inadvertently tarnishing a competitor brand in the eyes and minds of the consumer?

Whichever is the case, which light beer brand do you prefer? Miller Lite or Bud Light? First, let’s learn about the two light craft beers in this Bud Light vs Miller Lite review.

So, What’s the Difference Between Bud Light and Miller Lite?

Both beer brands have gained a loyal customer base worldwide. Habits and nostalgia play a big role in the minds of beer lovers when choosing a favorite brand. Consumers also decide to drink light beers for those moments when they don’t want to drink craft beer, water, or even soda. The taste of the light beers lies somewhere in between light beverages like soda or water and craft beer.

Although Miller Lite has less calories (96) than Bud Light (110), a difference of 16, the former has almost half of the carbs in Bud Light (3.2 vs. 6.6). Both light beers are too watery, making a preferable taste a matter of personal preference. Whereas some people prefer Bud Light or other beers similar to Bud Light, others crave Miller Lite.

However, Miller Lite has a nutty hint and thus wouldn’t be an ideal if you don’t like the taste of nuts. Most beer lovers who prefer Bud Light to Miller Lite base their preferences solely on the beer’s smooth feel and the fact that it’s easier to drink.

Miller Lite vs Bud Light – the better option of the two beers solely depends on your personal preference. If you’ve never tried these light beers, it’s wise to taste each to help you choose the one that best suits your taste buds. 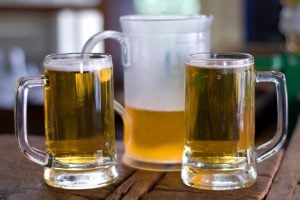 As shown in this Bud Light vs Miller Lite review, the two light beers have various similarities and differences. The main difference is that Miller Lite has less calories than Bud Light, and is produced using corn syrup as a source of sugar instead of rice.

So, you can opt for Miller Lite if you’re conscious about your weight. However, the calorie difference between the two beers is small. Try both beers to differentiate Bud Light taste from that of Miller Lite and let your taste buds choose the better option of the two.