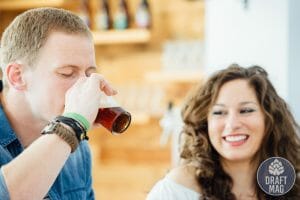 Our XXXB review covers the delicious extra special and strong bitter from George Bateman & Son Brewery, which will surprise you with its rather sweet taste. The beer is rich with malty, sweet, and fruity flavors that stand out from any other American craft beer.

The Triple XB beer offers you a smooth and creamy taste with a good balance of sweet and bitter flavors. Continue reading our full review of the XXXB beer to know what to expect from the bitter brew.

The XXXB beer is an extra special and strong bitter beer with an ABV of 4.8 percent ABV. The award-winning beer is popular in Britain for its delicious and sweet flavor that will surprise you, despite the name. It is brewed with three hops and four malts, giving you a spicy, fruity, and biscuity beer.

The beer features a bronze appearance, with aromas and flavors of sweet malts, toffee, fruits, honey, and cranberry. The beer feels smooth and sweet against your palate. It is delicious all the time and best served in a pilsner glass. The opening at the top of the glass enhances the aroma of the beer. The glass has a slimmer bottom that makes it great for mixing.

When you have the Triple XB beer, you should serve it from 50 to 55 degrees Fahrenheit. You can garnish the beer by adding citrus slices like lemon or lime or fresh fruits like berries to float at the top of the glass.

The Triple XB is the perfect choice when you’re having a fun time with friends or if you need something sweet to cool you during the winter months. Since it has a low ABV, you can enjoy drinking the beer without worrying about getting drunk quickly. It pairs well with a wide range of foods.

The Triple XB beer has a bronze to dark copper appearance and appears hazy and cloudy. You can barely see through it. There is a moderate amount of carbonation which translates to loose bubbles around the top of the glass. This gives it a lively appearance as you pour in your glass.

On top of the copper-colored beer is a thin beige head, up to two fingers high. The head is thin and will quickly dissipate to become nothing but very faint lacing against your glass. The lacing looks like snow frosts and is sticky, remaining on your glass for a while.

When you take the XXXB bitter beer to your nose, the first thing you smell is the sweet malty flavor. The malt presents itself in aromas of sweet, biscuity malt, caramel, and milk chocolate. Its aroma is very candy-like and will make you question its beer style.

The aroma is faint and does not overpower the flavor of the beer as you drink it. You will also notice banana notes, slightly burnt sugar, and hard water. The aroma of the ESB is enveloped in a subtle scent of fruits from the English hops, which is balanced with the sweet malt.

The Triple XB beer has a light body which presents itself in a watery texture as you drink. The light mouthfeel will appeal to many drinkers, especially since it still feels full on your mouth with the smooth texture. The mild carbonation offers a tingly feeling on your palate.

As you drink the XXXB beer, you will feel toasted bitterness against your tongue. The flavor of the beer lingers on your palate with a lasting taste. The beer has a clean and dry finish, with a pleasant bitter-sweet aftertaste even after you swallow.

The sweet aroma of the XXXB bitter follows into the taste, although not as cloying. When you drink the beer, you first taste the soft feeling and rich malty flavor. The beer is well-balanced with flavors of sweetness and bitterness, making it a wonderful option for any situation.

The beer has a malt-forward flavor with hints of sweet toffee and cranberry. The creamy flavor also offers tastes of banana and caramel balanced with toasted bitterness. Towards the end of the flavor, the taste goes from sweetness to slight bitterness.

With the balance of sweet, fruity, and bitter flavors, the XXXB bitter beer offers a great drinking experience. You will also notice hints of spiciness from the yeast, earthiness from the hops, dark fruits, biscuits, and sweet guarana. The beer finishes with a dry aftertaste and pleasant bitterness. The Triple XB beer is a great example of the English bitter, offering you a sessionable and flavorful beer.

Despite the complex flavor, you’ll be surprised to see that the Triple XB beer pairs with a wide range of foods. You can have it with British dishes like shepherd’s pie and bangers and mash, which are very delicious with this beer style.

The malt-forward flavor of the XXXB will complement fried batter, so you can have it with a wide range of deep-fried foods. Fatty foods are also a good idea, as the carbonation and bitterness of the XXXB will cleanse your palate while you eat. The Triple XB is good for eating with meat, too, so try out duck, venison, or quail.

You can have the Triple XB with roasted chicken too. As for desserts, oat-based foods like oatmeal raisin cookies will go well with the beer. You should also have it with carrot cake, cheesecake, fruity desserts like banana-orange crepes, panna cotta with lemon, and blood orange sorbet.

If you’re interested in having cheeses with your XXXB beer, you should have it with firm English cheeses like cheddar, red Leicester, crumbly cheeses, and blue cheese. In general, you can have the XXXB beer with your everyday foods like burgers, tacos, pizza, pasta, and fries.

As for the hops, the beer is made with English hops, including Goldings, Challenger, and Styrian Bobek. These contribute flavors of fruity and earthy bitterness obtained from the hops. The ingredients come together to give you a deliciously spicy, biscuity, and fruity beer. If you’re allergic to wheat or barley, you should avoid drinking this beer.

The Triple XB bitter beer features a 4.8 percent ABV and an OG of 1048. The color of the beer is SRM38, while the IBU is set at 36, so you can expect only slight bitterness as you drink. Due to the low ABV, the beer does not have a boozy aroma and flavor of ethanol.

The XXXB beer features 160 calories per every 330ml, so health-conscious drinkers should keep this in mind when calculating their dietary intake for the day. The carbs in the beer are 16.5 grams for every 330ml serving.

If you’re on a keto diet, you shouldn’t have the XXXB beer as it has a high fat content. The beer also contains wheat and barley, so you should avoid drinking this if you’re on a gluten-free diet.

The XXXB beer is brewed by George Bateman & Son or Batemans Brewery, based in England, United Kingdom. Described by the brewers as a tawny English beer, the ESB is one of the most popular beers from the brewery.

The beer is multiple winners of the CAMRA’s Champion Premium Beer of Britain. In 2019, the brewery won the award of the Gold Strong Bitter. Then in 2020, it won an award again, this time for the 2020 Silver Strong Bitter award.

The XXXB beer has been crafted since 1978 and is one of the top beers from Bateman, UK. It is provided year-round for beer lovers to enjoy. Batemans Brewery is one of the top choices in the United Kingdom, with four generations of craft-brewery know-how. They use only the best quality ingredients to brew beers and have been running since 1874.

Aside from the Triple XB beer, other classics from Batemans Brewery includes the Batemans XB, Yella Belly Gold, Salem Porter, and Skull & Hammer.

The XXXB beer is a brilliant take on the English bitter beer style, with a complex yet delicious taste and a wide range of food pairings. Here is a rundown of what we explored in our review of the Triple XB beer: If you’re curious about how an English bitter can taste so sweet, the XXXB beer is available at online stores and physical liquor shops close to you.