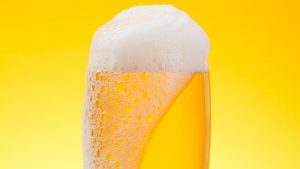 Beer enthusiasts have probably had the lager vs ale argument with their friends at least once. Although these are the two main types of popular beers, few people understand what makes them unique from each other.

It’ll surprise you to find out that most of their differences come from yeast.

Continue reading this guide to know more, and pretty soon you’ll have good points to throw when you get into an argument with other enthusiasts!

Here is a quick comparison table of the main differences between a lager and an ale.

What Is the Difference Between Lager vs Ale?

A lot of reasons are brought up when talking about the differences between ale vs lager, but these are the main points they differ on. Let’s take a closer look at these differences.

The seemingly simple difference between lager and ale is that the former uses bottom-fermenting yeast while the latter uses a top-fermenting yeast. But it is more complicated than that. The different types of yeast also combine with the fermentation and storage process and affect the ABV and hops, making the beer either a lager or an ale.

The yeast used in ale is called saccharomyces cerevisiae, commonly used in different applications including bread and wine. The ale yeast works better in varying environments from temperature to the alcoholic content. You can find it on every single continent.

This is called a top-fermenting yeast because when used to make beer, the yeast rises to the top and sinks to the bottom once the fermentation period is over. This makes it easier to harvest the yeast without disturbing it.

It is also a fast-action yeast, so it ferments the yeast in a short time. Give it at least a week, and you will already see the yeast products floating on top.

Lager yeast is called saccharomyces uvarum and is the complete opposite of what is used in making ale. This is why yeast is the main difference when looking at lager versus ale beers.

The lager yeast is more fragile than the ale yeast, so it needs certain conditions to work better. This also means that you get more varieties with lager than with ale.

The yeast is mainly called a bottom-fermenting yeast because it doesn’t rise to the top before coming back down. It also causes the fermentation process to go more slowly since it attenuates sugars gradually. With a low tolerance to alcohol and many unfermented sugars, lager ends up being a smooth and sweet beer.

There is also a difference between lager and ale when it comes to the temperature at which they are fermented. Yeasts usually die when the temperature is below 104 degrees Fahrenheit, and at 58 degrees, it will sporulate and stop acting.

Ales are usually brewed at higher temperatures between 60 and 80 degrees, although you can find some styles going as high as 100 degrees. This fermentation results in a cloudy and hardy beer.

On the other hand, lagers work best in lower temperatures, primarily since the yeast used for this type of beer originated from Germany, where brewing was only done during winters. This slow brewing will give a clearer appearance, which the lager beer is known for.

The alcohol content of lager and ale is also affected by the difference in yeast. Ale has a higher alcohol content than lager, which is another prominent difference between them. This is because ale yeast can survive in high levels of alcohol.

Lager yeast is more delicate, making it survive only when there’s less alcohol while fermenting, so lagers generally have lower ABV content.

Hops are present in all types of beer no matter how low, but there’s a difference in it when looking at lager and ale. Hop flavors come out more in lagers because of the cold treatment process, but the sugars overshadow the bitterness because of the slow fermentation.

This is different from ales, which usually have a lot of hops and a bitter taste. The hops provide a protective cover to the beer while it’s being fermented as well. The bitter taste seeps into the finish, which can be good or bad depending on your beer preferences and the style you’re going for.

The cold storage step is another difference between lagers and ales. Lagers go through cold conditioning that makes it clearer, hence its name that means “storage.” Historically, when lager was brewed, breweries would keep it in storage at a cool temperature, significantly affecting the clarity and flavor of the beer, which is not done for ales.

Although this step is believed to have started by mistake, it is now a compulsory part that results in the authentic lager flavor. It also allows the yeast, hops and protein to settle properly in the lager, reducing the haze typically found in an ale.

Ales and lagers taste very different from each other, and after trying them regularly, you will definitely notice their differences. The yeast used in making ale produces more phenols and esters while it ferments, giving it more fruity and spicy notes. Thus, you can enjoy tastes like pineapple, clove, banana, vanilla and others in an ale.

On the other hand, the yeasts used in lager give you a crisp and clean flavor, so the focus is on the grain and hops. The fruity and spicy tastes of Belgian ale or the banana-and-clove combo in hefeweizen is very different from the rounded and clean flavor and aroma in lagers.

Unlike other types of beer, the differences between ale and yeast cannot be identified by color. Although ales are dark, different blonde ales can be as light as pale lager. On the other hand, different lagers are as dark or black as stouts.

The color of the beer is affected by the malt bill and not the yeast, so ales and lagers can be light or dark even if they are different. Other additives like spices and fruits also influence the beer’s color.

If you’re trying to decide if you prefer lager or ale beers, it’s helpful to know that these two are broad categories and there are many styles underneath them. In this section, you’ll see whether these popular styles of beer are classified as lagers or ales.

Food pairings can be different for the different lager and ale styles too, but generally, ales usually go with steak, spicy food, fried food, sausage, fish and other seafood, barbecue, smoked pork, chocolate desserts and others.

As for lagers, they pair well with spicy food, burgers, fruity desserts, hearty stews, seafood, game meats and others.

When pairing food with beer, you should first check the flavor profile of the beer you’re drinking. Then you can pair it with the best type of food for these flavors.

A lager is mostly a light-colored, highly carbonated beer made with bottom-fermenting yeast. The name originates from the German word lagern, which means to store. It is made by brewing at a cool temperature with a slow-acting yeast, leading to slow fermentation.

Lager originates from Northern Europe where Germany and Austria are located. It has been made with a few variations for thousands of years using one particular yeast strain. Lager is known as the most popular beer in the world.

What Is a Ale Beer?

Ale is a full-bodied, sometimes bitter and fermented solid malt beverage with an intense aroma and flavor of hops. It is made with top-fermenting yeast and processed at a high temperature and calcium sulfate-rich water.

It is a darker and heavier beer, with up to 6 percent ABV depending on the type you use. It is also malt-forward. There are different kinds of ale, one of the most popular being Indian Pale Ale. You will also find some types of ale that are sweet with a fruity taste.

Ale is pretty popular in America.

Last Thoughts: Which Do You Prefer? 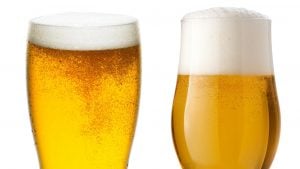 Knowing the differences between lager and ale is more than having points to argue with your friends. It also helps you decide which one you like better based on their characteristics and can even assist you in your homebrewing process.

With this knowledge, you can better understand the types of beer that you like. If you decide that you enjoy both lager and ale, then that’s a win-win for you!