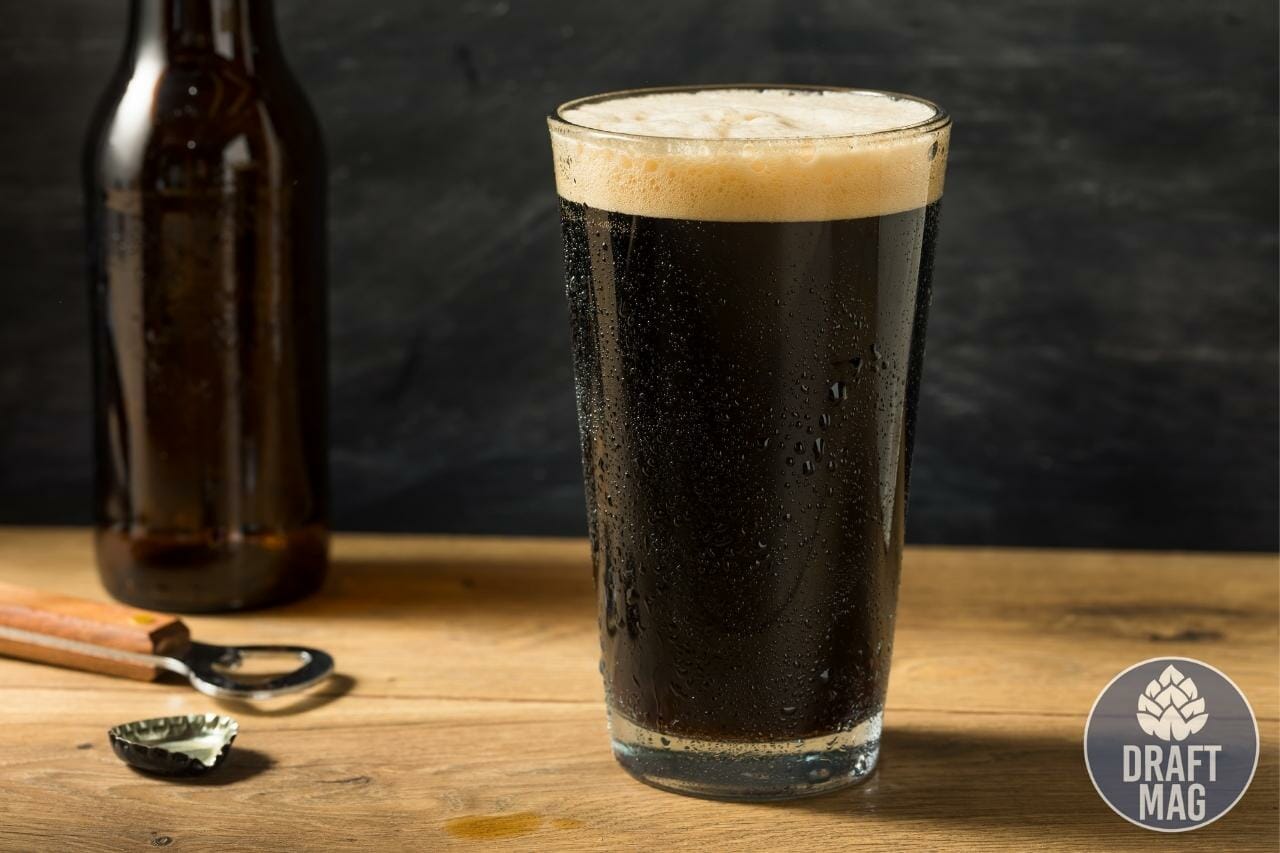 In the world of beer, Pastry Stout has been the latest talk of the town because of its unique sweet taste.

The category of pastry beers remains unlisted at the moment but is the newest form of beer filled with dessert-inspired ingredients, making for some delicious beers.

These beers are an unofficial sub-style of imperial Stouts, and in simple terms, dessert Stouts are nothing but drinkable cakes and pastries flavored like candy bars, cakes, doughnuts and cookies. Without further ado, let’s jump right into the most complete Pastry Stout guide you’ll ever lay hands on!

What Is a Pastry Stout?

These beers are intentionally brewed sweet and contain a lot of sugary ingredients, resulting in a beer that feels like drinking a batch of fresh cookies or a delicious cake. While this style remains unofficial on charts and was started simply as a sickly sweet beer, Pastry Stout is now the term universally accepted in the craft beer community.

Just like Hazy IPAs and Milkshake beers, sweet Stouts quickly gained popularity, especially among non-beer drinkers. But Pastry Stouts are not session-able as they are loaded with confectionary ingredients like vanilla, chocolate, coffee, biscuit, cinnamon, nutmeg, marshmallows and more.

Let’s be honest, not all of us enjoy the taste of beer. This is where these dessert Stouts enter to make things easier, as you can grab on to one of these sweet drinks and not feel left out from the crowd.

Back in the day, Imperial Stouts added some of these ingredients only as highlighters in their beers. And today, we have beers being made only by using such ingredients.

The ingredients found in Pastry Stouts can vary from simple single ingredients to extreme flavors. On a scale of mildly sweet to extremely sweet, these beers can fall anywhere in between. This is why there isn’t a set guideline or style or rules for this type of beer. It completely depends on the brewer how he decides to brew his sweet Stout.

Some brewers employ lactose (milk) and sugar in their beers to bring in a creamy texture to their beers. While some enjoy the thought of milk in beer, hardcore beer lovers would cringe at this combination.

While there are different combinations of ingredients used in brewing a good dessert Stout, the most important question to ask yourself is – what flavors do you want your sweet Stout to hold?

Your Pastry Stout can be influenced by your favorite dessert or any other sweet dish which is universally accepted and you know anyone and everyone will enjoy.

Some brewers mix flavors of vanilla and blueberry with added lactose to bring the feel of a blueberry cheesecake. Some others focus on straightforward Stout flavors of coffee and chocolate. These are simple to brew and universally accepted, as one cannot go wrong with original Stout ingredients.

There are many homebrewers who experiment with ingredients like cranberry, vanilla, cinnamon, caramel and the like, which are more extreme and experimental on the palate.

A brewer’s creativity is put to the test when it comes to combinations of ingredients in Pastry Stout. The flavors and tastes that your beer will yield completely depends on how artistically the ingredients are combined and presented.

Here are some of the most popular Pastry Stout flavor:

The secret to these flavors is the addition of ingredients or unmalted grains that add to the base flavor of hops used in the beer. Coffee can also be added to any of these combinations. The coffee and beer combination is a big hit in the industry and one can never really go wrong with this balance.

There is no clarity on what makes for a good dessert Stout. This category of beer remains un-guided and has no set rules or boundaries within which the brewer acts. While one sweet Stout can be appealing to a certain section of the crowd, some others may not enjoy the same flavors. It is completely subjective from person to person.

There are plenty of seasoned beer enthusiasts who don’t even consider this category as an official beer, whereas some others enjoy experimental beers and believe there is no hard in thinking out of the box every once in a while.

Also, there is nothing perfectly “balanced” about a Pastry Stout. Sometimes, too much caramel feels right, and some other times it just feels off. When it comes to Pastry Stouts, the game-changer is how well the brewer manages to weigh out the right combinations of ingredients to yield the perfect dessert beer. It should neither be too subtle nor too loud.

– Balance Is the Key

If we had to decide what makes for a good Pastry Stout, it would be “balance.” And the best way to bring the right balance in a Pastry Stout is by making sure the base beer is free of any added flavors, ingredients, off-flavors or flaws. If the base beer is perfectly brewed, then there is a good chance the ultimate result will be good too.

While some brewers believe in a good base beer, there are some others who suggest that off-flavors are sometimes inevitable in any Pastry Stout. An equivalent base recipe, quality ingredients, quality cellaring, packaging, and storage can play a major part in the equation of a Pastry Stout.

Poorly made Pastry Stouts depend majorly on artificial flavors, extracts and flavored essence instead of natural flavorings. The more natural you are with your ingredients, the higher your chances are to brew a delicious Pastry Stout. A Pastry Stout is a dessert beer, a liquid replication of any dessert, so just like you can’t go wrong with the combinations and ingredients in a dessert, you can’t manipulate the same in a Sweet Stout.

Pastry Stout lovers aren’t looking for basic flavors in their beer. If you can guarantee a beer with bold flavors with an equal amount of base beer character, both heartily complimenting each other, then you will become a hit. A huge body with a mouthful of deliciousness combined with Stout characters and topped with favorite dessert flavors will put you on the right path. 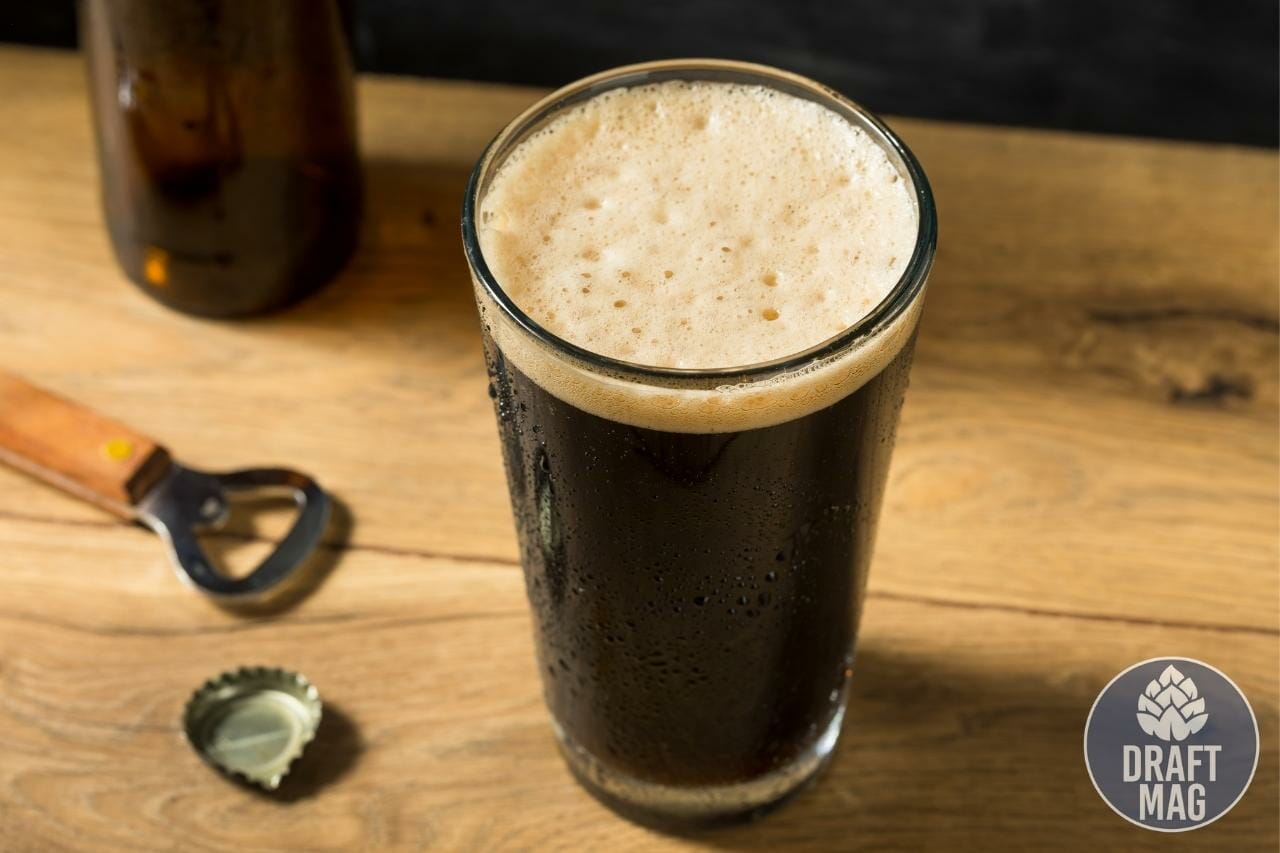 It is a brilliant example of how the bitterness of coffee can work wonders alongside sweeter ingredients with a light finished oatmeal base.

Another brewery that makes some delicious beers after some famous desserts are Virginia’s Oozlefinch Beers & Blending. Their Das Yummy series is a tasteful example of a good Pastry Stout.

The brewers use ingredients like lactose, lemon peel, vanilla and graham crackers alongside blackberry tarts, lemon pie and peach crumbles to create this dessert masterpiece.

If you’re looking for some of the best Pastry Stouts to try, this is your ultimate list. Some of these are award-winning beers, while some others simply taste delicious. So regardless of what your go-to dessert is, you must try these Pastry Stouts and pick your favorite:

As the name suggests, this is an Imperial Stout brewed with coffee. With an ABV of 10.3 percent, this Pastry Stout is brewed with hard roasted pecans, coffee and cocoa nibs. The aromas are full of marshmallow, graham cracker and cinnamon ingredients. Some people refer to this as a “liquid s’more.”

The Covfefe is the first beer in the beer trilogy of the “thank you beer series” which arose from a crowdfunding campaign. The beer is full-bodied and full of rich creamy coffee texture leaving a bittersweet dark chocolate flavor behind.

This Imperial Stout is a very special and limited brew from the Great Divide Brewing Company in their venerable Yeti series. Plenty of mouthful spices has been added in this beer like cinnamon, clove and mint alongside rich flavors of vanilla, chocolate and coffee. This is a traditional Champurrado drink. These types of drinks have been a tradition in Mayan and Aztec cuisine for centuries.

With a 9.5 percent ABV, this is a relatively strong Pastry Stout and is usually available from April to October.

With 9 percent ABV, this beer is jam-packed with warm winter spices like nutmeg, allspice, vanilla, cinnamon and maple syrup. This is a well-balanced beer that is slightly syrupy with a good strong base beer and perfectly blending winter spices to keep you warm on a cold autumn night.

This is one beer brewed with complete finesse. It has extremely complex flavors and is aged in Barbados Rum barrels with coffee and cocoa. Some tasters have pointed out its counterintuitively refreshing taste. The drink also has a mouthfeel of caramel, chocolate and burnt sugar notes that last in the aftertaste with a delicate coffee after the finish.

With an ABV of 5 percent, this beer is super smooth and filled with aromatic spices. If you are a chai lover, you will be pleased by this beer. It has slight floral aromas that align with pumpkin spice, and the overall mouthfeel is silky-smooth; this is a definite crowd-pleaser.

With an ABV of 10 percent, this is an Imperial Stout from New York. This is a decadent, flavorful beer that is a complete indulgence. It has booming notes of chocolate, caramel and coconut and remains a famous seasonal treat.

This is an Imperial Stout with prominent flavors of Tahitian vanilla beans and banana. It is brash power in a bottle and is one of the most powerful beers at 16.6 percent ABV. It’s dark and loud but not syrupy. It has a smooth pour and is easy to drink.

Some argue that this is not a dessert Stout, but the sweet taste of this beer begs to differ. It is an Imperial Stout brewed with vanilla and cocoa nibs. There are no additional wild ingredients or barrel aging involved.

It is a rather simple brew, which remains smooth to drink with a light aftertaste and mouthfeel. On finishing notes, this beer tastes like sweet fudge and caramel gooeyness.

While Pastry Stouts cannot completely replace beers, they are surely a hit in the industry. These aren’t completely healthy, but there are some benefits we can obtain from these dessert beers.

As with the benefits mentioned above, there are also disadvantages to consuming too much of this drink. As with all alcoholic beverages, remember that moderation is key.

The beer scene in the last couple of decades has been full of twists and turns. From Hazy IPAs to West Coast IPAs, Session IPAs and Bruts, it’s not surprising that these delicious dessert Stouts are coming around more often than not.

They are slowly becoming more acceptable in the craft beer community. Craft beer is all about pushing boundaries and experimenting with random ingredients to develop tasteful beers, and Pastry Stouts allow craft brewers to think outside the box and build flavorsome profiles in beers.

Whether you are a dessert fan or not, these beers are the next big thing. Many brewers feel that the excitement around pastry beers is attracting more and more crowds at a decent pace. Some even believe this is a getaway style for traditional beer drinkers and may last for a while, but how long these beers will last on the beer map cannot be predicted yet.

It is only a matter of time before these beers turn into non-alcoholic Pastry Stouts. Like most other experimental beers, the Pastry Stout taste will rise and fade into the horizon sooner or later, paving the path for something new. 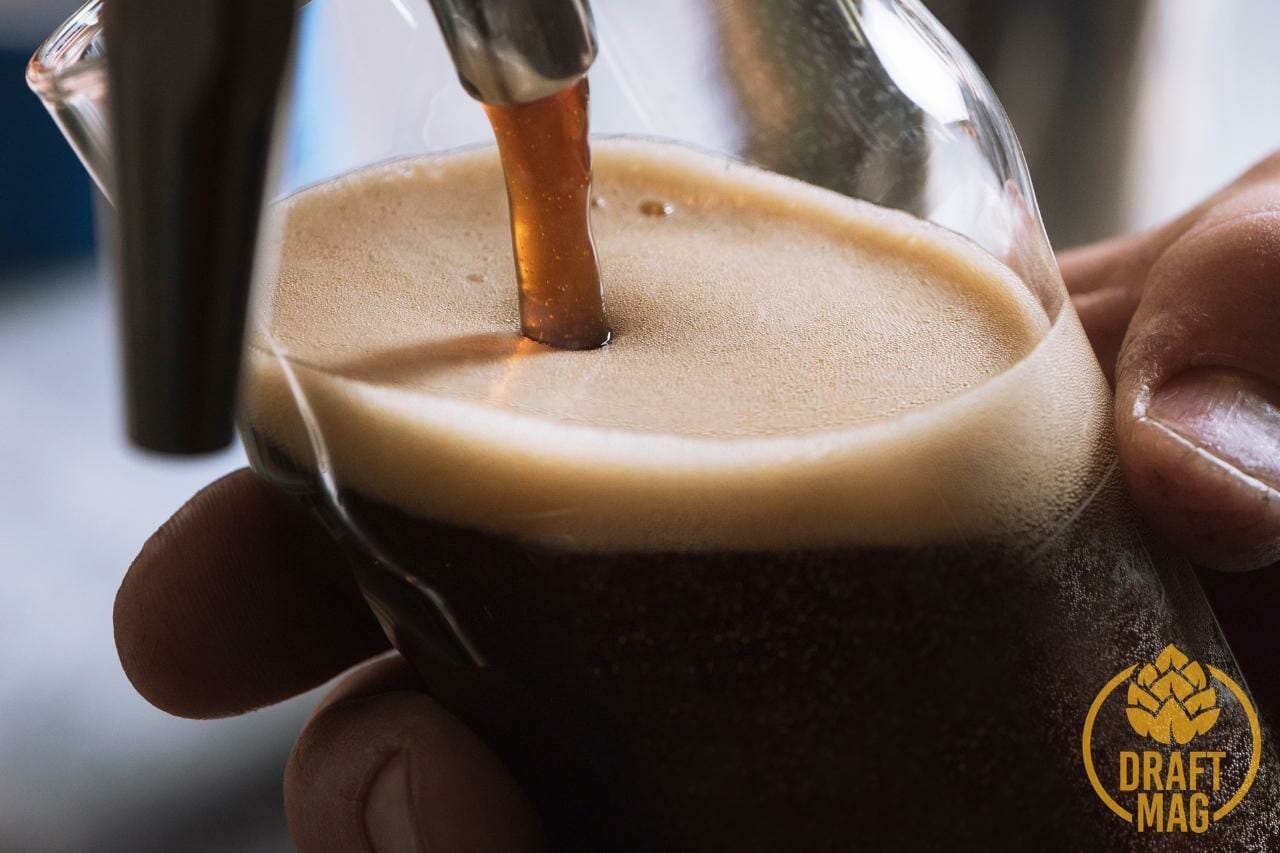 One cannot deny the fact that with Pastry beers it is easy to go way too sweet, but there is a thin line between welcoming sweetness and cloying. The safest bet is to test batch a beer style and then go ahead with mass production.

The creative combinations of these beers are what attract drinkers to them. This is one craft beer that is a testing ground for the creativity of craft brewers.